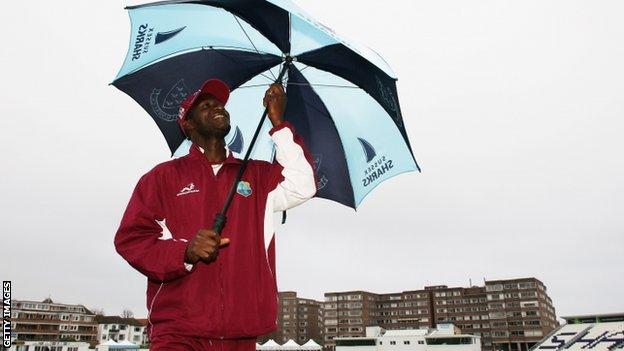 West Indies were again frustrated by the weather on day two of their opening tour match against Sussex at Hove.

more overnight rain prevented any cricket before lunch, with bad light forcing an early close after only 18 overs.

In that time, opener Adrian Barath was bowled by Kirk Wernars before Kirk Edwards was caught behind off Chris Liddle to leave the tourists 46-2.

The Windies face England in the first Test at Lord's on 17 May.

Sussex, with England pair Matt Prior and Monty Panesar in their line-up, won the toss and struck soon after putting the tourists in.

Barath had made just 16 when he deflected a Wernars delivery on to the base of the stumps off his pads.

Edwards ought then to have gone for a second-ball duck, but was dropped at second slip by Luke Wells off Liddle.

Edwards and Kieran Powell then defended stoutly until Edwards was out for eight as he was caught at third slip by Chris Nash.

Bad light then stopped play just before tea and no further action was possible.

The tourists are also confident that Assad Fudadin, Narsingh Deonarine or Marlon Samuels will arrive in time for the game against England Lions at Northampton, which begins on Thursday.

Fudadin and Deonarine are in Jamaica awaiting visas, while Samuels is still to begin his journey from the Indian Premier League.

"We are not concerned about it," said a team spokesman.

"We are hopeful that they will be here in time for the (England) Lions match."