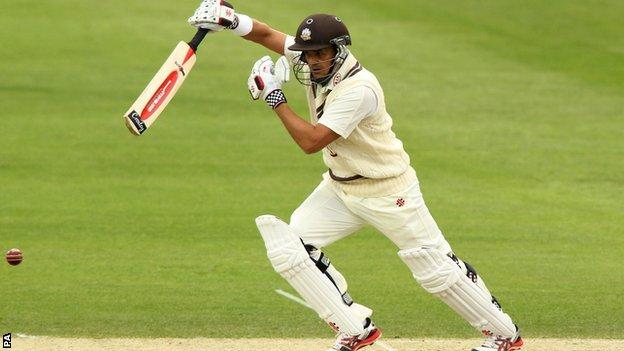 Reigning Clydesdale Bank 40 champions Surrey added Scotland to their midweek scalping of Somerset at the Grange in Edinburgh on Sunday.

Their 18-run win on the Duckworth-Lewis method was boosted by Jacques Rudolph's 69 as they posted 187 for seven before the rain dampened Scotland's hopes.

The hosts struggled to gain momentum, aside from Richie Berrington's unbeaten 43, but the weather ended the comeback.

Scotland's next home match is against Nottinghamshire on Monday.

After opening their campaign with victory over last season's beaten finalists Somerset in midweek, Surrey were made to sweat early by the unfancied Scots after being sent in.

Skipper Rory Hamilton-Brown, who struck a stunning century against Somerset, fell for just five in the second over and Jason Roy quickly followed to leave Surrey 20 for two.

That brought South African Rudolph to the crease early and he slowly set about accumulating runs in the tricky conditions.

His steady bid to set a platform was undermined, however, by the departures of Steven Davies (22), Zander de Bruyn (16) and Matthew Spriegel (15) before they could find full flow.

Rudolph remained patient, though, hitting just a single boundary in his 89-ball stay, before Scotland managed to extricate him in the 36th over.

Off-spinner Majid Haq (2-27) made the breakthrough when he had Rudolph caught by Jean Symes to leave Surrey 151-6.

While Ireland international Gary Wilson (nine) then fell soon after, Surrey finally produced some late hitting thanks to Gareth Batty (17 off 15 balls) and Jon Lewis (15 off eight).

Scotland's chase was soon affected by the rain, the players forced off after 3.5 overs with the score 13 for none.

Two overs were lost and when the players returned England seamer Jade Dernbach quickly removed Calum MacLeod before Josh Davey and Symes fell in consecutive overs to have Scotland in trouble at 39-3.

When opener Fraser Watts (25) was stumped to give Spriegel (2-16) his second wicket, the hosts looked to be losing their way before Berrington started to turn things around.

With the rain threatening, the 25-year-old right-hander progressed to 43 from 57 balls, but he did not have enough time to overtake the Duckworth-Lewis calculations as the weather finally closed in with the Scots 118-6.