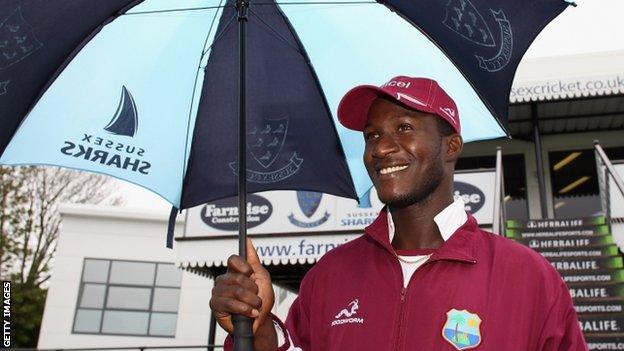 Further rain meant only 16 overs were possible on the third and final day of West Indies' opening tour match against Sussex at Hove.

The weather had restricted the tourists to 18 overs in the middle on the first two days, the Windies reaching 90-3 when the match was finally abandoned.

In the play that was possible, Shivnarine Chanderpaul required treatment after being hit on the hand.

But the Windies said he will be fit for the first Test, which begins on 17 May.

The tourists' visit to Lord's, the first of a three-Test series, is preceded by a second warm-up match against England Lions at Northampton, which begins on Thursday.

"It's a little bit frustrating," said Windies batsman Darren Bravo. "The guys really wanted to get out there and get as much match practice as possible, with a Test match starting in a few days. But we can't do anything about it."

After the tourists resumed on 46-2, they lost Kieron Powell, caught behind by Matt Prior off Naved Arif, to see Chanderpaul join Bravo in the middle.

Bravo struck three cover drives to the boundary, one of which came off the bowling of Amjad Khan, who responded by rattling the left-hander's helmet with a bouncer.

However, Bravo seemed to be in less discomfort than Chanderpaul, who hurt his hand after apparently jarring the joint as he made defensive contact against Khan.

He received strapping to his thumb and index finger, with Bravo saying the injury was nothing more than a "slight bruise".

Anything more might pose a problem for the Windies, whose side for the match at Hove were the only 11 fit and available players in England.

Pace bowler Fidel Edwards has a back injury, while Darren Sammy's side are still awaiting the arrival of three of their 15-man squad.

Assad Fudadin and Narsingh Deonarine are awaiting visas and Marlon Samuels is still to begin his journey from the Indian Premier League.

However, the tourists maintain they are hopeful the trio will be in the UK in time for the match against England Lions.