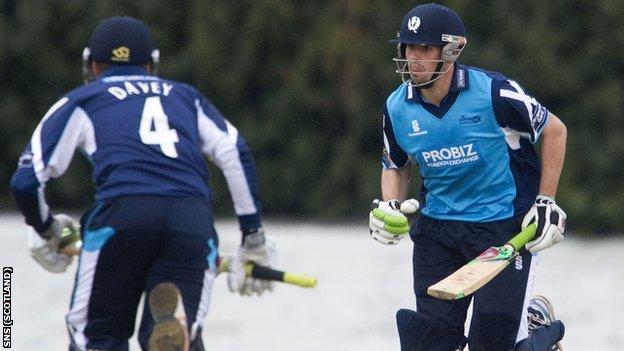 Scotland claimed an 18-run victory against Nottinghamshire in Clydesdale Bank 40 Group B, using the Duckworth/Lewis system.

Nottinghamshire were put into bat and posted 219 for seven in Edinburgh, Chris Read top-scoring with 59.

Josh Davey and Madjid Haq took two wickets each and the weather forced a revised target for the Scots.

Calum MacLeod's 58 runs and 44 from Davey gave Scotland their victory after 23 overs.

After losing the toss, the visitors' Alex Hales was bowled out for 18 by Matthew Parker in the sixth over before Riki Wessels followed in the seventh for one, leaving Nottinghamshire 25 for two.

Samit Patel joined Michael Lumb to restore some stability but the opener was caught behind off the bowling of Richie Berrington for 26.

James Taylor and Patel took the visitors into three figures before the latter was out for 36 from 43 balls, caught by MacLeod to become Haq's first victim.

Read and Taylor's strong partnership came to an end as MacLeod made another catch off Haq's bowling, Taylor having made 34 runs off 56 balls.

Further catches by Ryan Flannigan and MacLeod ensued as Read and Franks fell to Davey's bowling but the visitors survived the remaining nine balls unscathed.

MacLeod and Davey made a fast start in Scotland's innings, powering to 73 without loss after 15 overs.

The partnership reached three figures in the 21st over and eight more runs were posted before rain halted play, the hosts' finishing 18 runs ahead of the D/L par.

And, having lost to Surrey in another rain-affected encounter on Sunday, the Scots picked up their first group win.