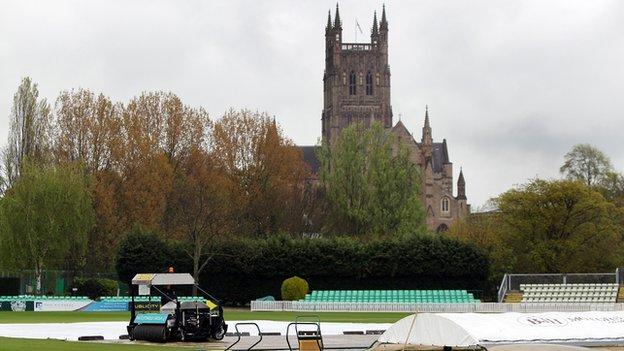 The county were forced to book a return to their second home at Kidderminster when floods left the playing surface on the pavilion side covered by water.

But the New Road playing surface has drained more quickly than anticipated.

England batsman Kevin Pietersen has been named in Surrey's squad and is set to play after returning from the IPL.

Worcestershire said in a statement: "Due to the improved drainage facilities put in place after the last major flood in 2007, the ground and facilities were completely clear of flood water this afternoon [Monday].

"The club would like to thank all those involved at Kidderminster for the use of their facilities during the last two weeks, and for their continued support."

Worcestershire played their CB40 fixture against the Netherlands on Monday at Kidderminster.

But, in a rain-affected game, Steve Rhodes' side suffered a shock defeat, losing by nine wickets on the Duckworth-Lewis method as the visitors, chasing an original Worcestershire target of 172-4 from 27 overs, made 139-1 in 16.5 overs.

That came on top of Sunday's final-day Championship defeat at Lord's when they lost to Middlesex - to leave them without a win from their first four matches.