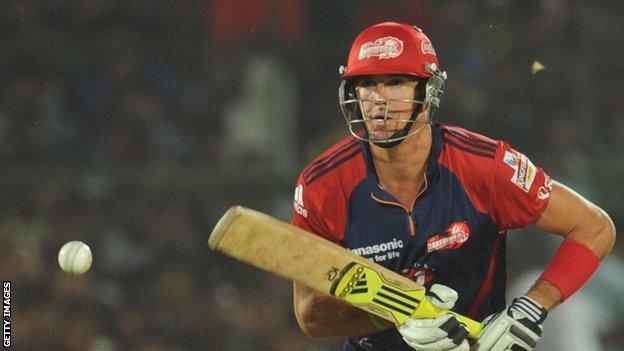 England batsman Kevin Pietersen says he feels on top of his game as he returns to county cricket with Surrey.

The 31-year-old is set to feature against Worcestershire on Wednesday after time away on Test duty and a spell in the Indian Premier League.

He told BBC London 94.9: "I turned a corner in Abu Dhabi and Dubai with my batting and luckily I continued that through in Sri Lanka and the IPL.

"It's different conditions now and it's going to swing. It'll be testing."

Pietersen averaged 61 over his eight innings for the Delhi Daredevils in India, including his maiden Twenty20 century.

"The IPL is the best tournament going," he continued. "There is nothing better than the IPL.

"I have mixed feelings. It's nice to come back and start the county season and play but it's cold.

"I always look forward to playing with Surrey. There's so much talent in the dressing room which is brilliant to play with.

"Hopefully the weather holds up so we can get a game."

Surrey cricket manager Chris Adams is delighted to have Pietersen available for selection before England's summer schedule begins with the first Test against the West Indies next week.

"I watched his progress in the IPL and he looked in superb form, which has followed on from when he was last in an England shirt," Adams said.

"He looked like he'd freed himself up and was taking calculated risks around his strongest shots.

"I expect him to continue like that. I think he'll go out and play with confidence.

"He clearly has the talent and ability to deal with any situation. I expect him to adapt and deliver."