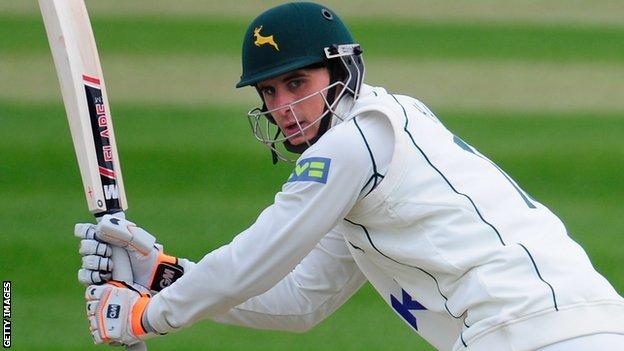 Nottinghamshire were closing in on top spot in Division One of the County Championship after dominating a shortened day's play against Middlesex.

With leaders Warwickshire not in action, Notts need five points to overtake them and they made a bright start to end day one on 132-1.

Steven Finn bowled Neil Edwards for a duck but the hosts then took charge.

Alex Hales hit his highest score of the season to reach 71 not out, while Michael Lumb was unbeaten on 51.

However, there was an early finish to the action at Trent Bridge as rain brought a premature end.

Although play started on time, just 42 overs of play were possible on the opening day before the weather curtailed the action mid-afternoon.

It was a day of relative inactivity for England captain Andrew Strauss in the field, while international team-mates Graeme Swann and Stuart Broad saw no action.

Hales, 23, who was overlooked for the England Lions side for their match against West Indies this week, will be hoping to add the 29 runs he needs on Thursday to claim the fifth first-class century of his career.

"It was yet another frustrating day at the start of the cricket season as rain was the eventual winner.

"However, Middlesex may be relieved that an below-par bowling performance was cut short.

"Alex Hales and Michael Lumb both batted with time and control - that's a luxury that Middlesex cannot allow the hosts tomorrow or a daunting first innings total awaits.

"It does appear to be the best batting track of the season so far but that cannot hide from a performance with the ball that wasn't up to their usual standards."