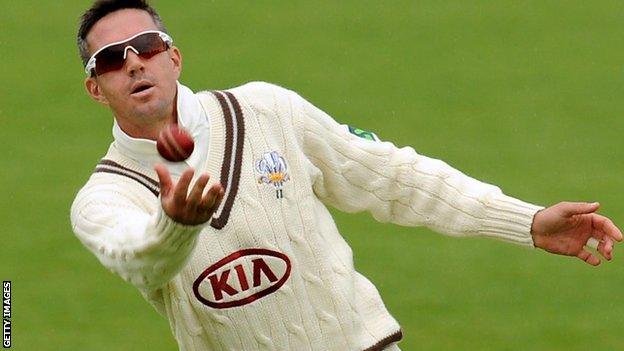 Worcestershire made slow progress on a rain-hit opening day in their County Championship match against a Surrey side that included Kevin Pietersen.

The hosts won the toss and batted, although they could only reach 58-0 off of 26.1 overs before rain caused an early end to Wednesday's action.

Daryl Mitchell is unbeaten on 30, while Michael Klinger will resume on 16.

Surrey, who had Pietersen available for the first time in 2012, also handed a debut to 19-year-old George Edwards.

Fast bowler Edwards, a product of the club's academy, went for 16 runs off of his first six overs in County Championship cricket.

Pietersen missed Surrey's previous games this season as he had a three-week spell playing for Delhi Daredevils in the Indian Premier League.

This game had originally been scheduled to take place at New Road but was provisionally moved to Kidderminster due to flooding before finally coming back to Worcestershire's main home.

Off the pitch, there was good news for the hosts as all-rounder Gareth Andrew is close to a first-team return after a knee injury proved to not be as serious as first feared.

"Another frustrating day for players, spectators and commentators as play was finally called off for the day at 4.30pm.

"A few eyebrows were raised when Daryl Mitchell won the toss and elected to bat, but it seems to have been proved to be a right decision.

"Apart from one or two that stopped on the batsman, it looks like a fairly even-paced pitch, although George Edwards hurried both batsmen with genuine pace.

"It seems we have spent more time this summer looking at forecasts and the rain radar than we have watching cricket, but it's still better than real work."