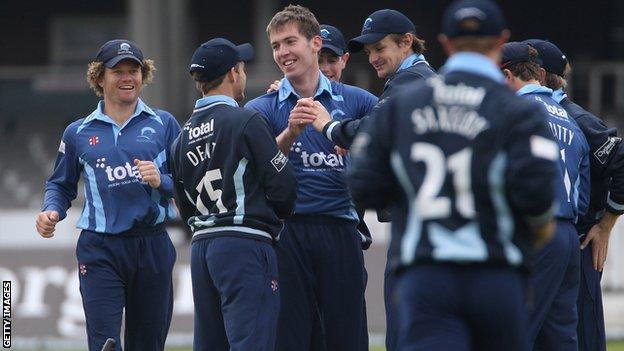 Graeme McCarter says taking three wickets on his debut was the "perfect start" to his Gloucestershire career.

The 19-year-old paceman received his maiden call-up to the first-team for their CB40 match against Middlesex at Lord's on Sunday.

And he took 3-41 from his five overs, helping his side to a five-wicket victory in the rain-affected game.

"I couldn't have asked for a more perfect start to my career," McCarter told BBC Radio Bristol.

"I thought there was a chance I might not be playing but it was always in the back of my mind. I found out about half an hour before the match started so I was very nervous.

"Playing at Lord's is unreal. I was just looking around me going 'what am I doing here?'.

"I was quite nervous for the first over, especially after getting hit for a few runs. But to hit back and get a few wickets was pretty perfect for me."

McCarter, who has made one appearance for Ireland in the ICC InterContinental Cup, joined Gloucestershire's academy in 2010 and has been a regular in the second XI.

But after impressing on his debut, he has now been included in the squad for the County Championship game against Yorkshire, starting on Wednesday.

"It's about consistency in performances now," added McCarter. "I've just been called up to the four-day squad and I want to get as many caps as possible.

"That was the one I really wanted and it's still my main aim for the season."