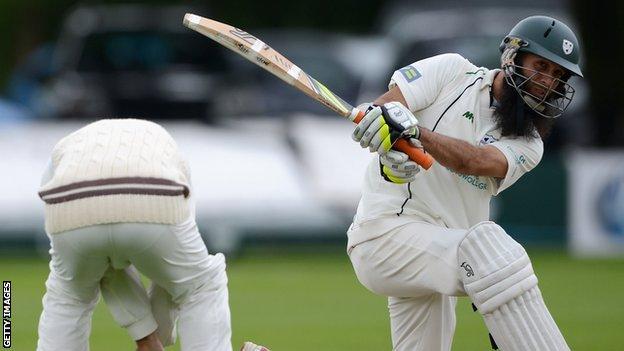 A half century by Moeen Ali helped Worcestershire to their first batting points of the season on day two of their home encounter with Surrey.

Ali hit 61 before he was caught behind to become 19-year-old George Edwards' maiden first-class victim.

Cameron's dismissal, when he was caught by Zander de Bruyn off of Linley's bowling, saw the end of play on day two.

Worcestershire, who began the match eighth in Division One, have struggled with their batting this season with first innings scores of 130, 119, 157 and 45-2 declared in their previous four matches.

There was, however, no easy ride against a Surrey attack minus Chris Tremlett, who is still recovering from injury, and the England Lions pair of Jade Dernbach and Stuart Meaker.

Linley dismissed openers Daryl Mitchell and Michael Klinger in the same over before Solanki and Ali put on 102 for the third wicket, and once Ali had departed, he and Lewis ran through the tail.

"An interesting day where, despite four weather interuptions, Vikram Solanki and Moeen Ali took Worcestershire towards that rarity, a batting bonus point.

"Tim Linley was the best of the Surrey attack but Jon Lewis came back well after the rain break, and indeed broke a stump bowling David Lucas.

"Worcestershire's lower order struggled and it remains to be seen what is a good total on this pitch.

"Alan Richardson showed his prowess with the bat as he passed 1,000 runs in his career in a last-wicket stand of 31 with the ever-impressive James Cameron."