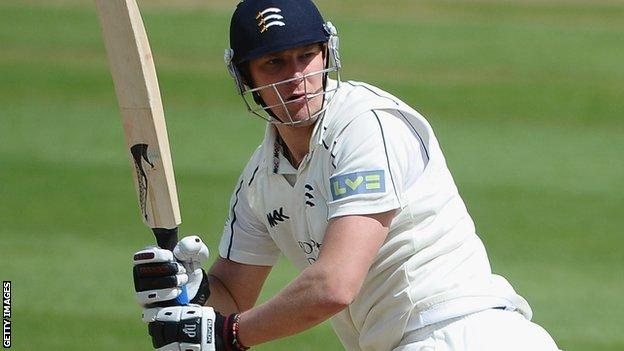 Ollie Rayner scored a maiden Championship ton as Middlesex fought back against Nottinghamshire.

Nightwatchman Rayner (143 not out) helped the visitors avoid the follow-on and rescue them from 63-4 to post 300-9 declared, 123 runs behind.

Harry Gurney took 3-47, Andre Adams 3-75 and England spinner Graeme Swann 2-55, but paceman Stuart Broad was the most expensive with 1-79.

Earlier, Middlesex resumed their first innings on 51-3 and Adams struck in the third over of the day to get rid of Joe Denly (35) to a neat low slip catch to Hales.

But Rayner and Dawid Malan (46) dug in and put on 119 either side of lunch, before the latter was given lbw to a speared-in yorker from Gurney.

Rayner, who after a successful loan spell, passed three figures with a straight drive for four off Paul Franks.

Neil Dexter chipped Swann to Adams at mid-on just ahead of the new ball and Gurney soon accounted for John Simpson.

Broad bowled Gareth Berg, before Swann returned to bowl Tim Murtagh just before the declaration, leaving Notts to face 10 overs in the evening.

"An extraordinary performance by Ollie Rayner has given this game an intriguing twist.

"After defying the Notts bowlers for five-and-a-half hours in compiling the best score of his career, he then celebrated by picking up two cheap wickets.

"Ironically, the way the game moved forward after tea now brings up the prospect of an even more intriguing final day.

"Middlesex will take confidence from their first innings and fancy a run chase, whilst Notts will believe that Graeme Swann will have a major say in the outcome. Should be a an exciting fourth day."

"Middlesex produced a stunning fightback on the third day, having lost all four previous sessions of the match.

"Ollie Rayner was the star of the show after coming in as nightwatchman on the second evening and he finished unbeaten on 143 to help his side avoid the follow-on.

"The off-spinner is known as a powerful lower-order batsman but showed his class with a considered knock that was almost a stand-alone effort to defy the hosts.

"Rayner then found time to pick up two wickets before the close as Nottinghamshire finished three down. All results are now possible on the final day and may be helped by an agreement between the captains."