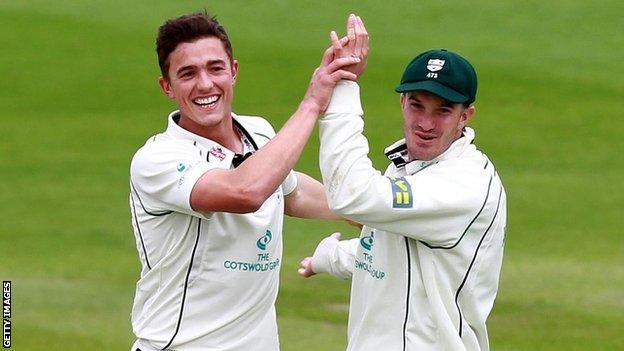 Superb seam bowling by Richard Jones gave Worcestershire a chance of their first Championship win of the summer on day three against Surrey at New Road.

And Jones was soon among the wickets again when Surrey followed on, with Mark Ramprakash completing a pair.

It could have been even worse for them had Alan Richardson not suffered an arm injury half-way through his second over with the new ball and had to leave the field.

"He's had a scan and it shows some fluid at the back of the shoulder, but I can't tell you the exact terminology," Worcestershire director of cricket Steve Rhodes told BBC Hereford & Worcester.

"We'll assess things in the morning to see what part if any he can take in the game.

"He's the main bowler for Worcestershire and he got 73 wickets last year so it's a big blow to see him come off the field."

After mustering only 285 in their first innings, Worcestershire needed early wickets, but bowling Surrey out in just 44 overs must surely have exceeded even their most optimistic expectations.

Four of Surrey's top six failed to score and apart from Rudolph, who was dropped twice at slip by home skipper Daryl Mitchell, only Pietersen (11) and teenager George Edwards managed double figures.

Having narrowly failed to carry his bat, Rudolph did not last long second time around as he was bowled by Jones for two and when Ramprakash departed for a third-ball duck, the visitors were in danger of capitulating.

Steve Davies contributed (24) as he and Pietersen steadied the ship with a stand of 87 and the latter looked in excellent touch as he struck a six and 10 fours before being surprised by a ball from Jones that bounced more than he expected as he advanced down the pitch and jabbing a catch to Mitchell at second slip.

It proved to be the home side's final success of the day, however, as Surrey skipper Rory Hamilton-Brown (50) and Tom Maynard (63) counter-attacked with an unbroken partnership of 91 in 20 overs.

"Worcestershire had a terrific day with the ball and earned themselves a very handy first-innings lead but Surrey are still in the game.

"David Lucas and Richard Jones both bowled well, each taking four wickets to help bowl out the visitors for only 113 and Surrey were soon in trouble again when following on.

"With Rudolph and Ramprakash both back in the pavilion with only 11 runs on the board, it was looking grim for the visitors, but Kevin Pietersen led the fightback with a fine knock of 69.

"Rory Hamilton-Brown and Tom Maynard have so far put on 91 for the fifth wicket but Worcestershire will be feeling if they can pick up a couple of quick wickets early on the final day then they should be able to close out the win."