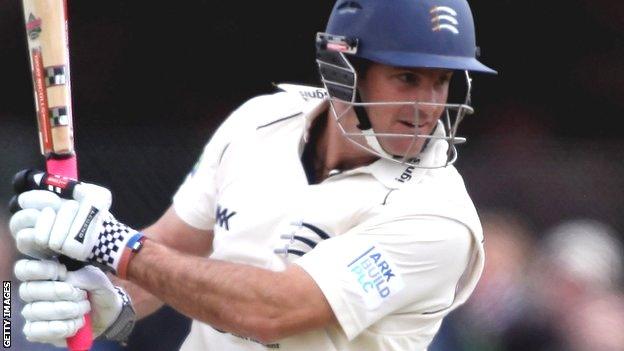 Andrew Strauss returned to some form as Middlesex and Nottinghamshire's encounter petered out into a draw.

Strauss, who will captain England in their first Test with the West Indies at Lord's on Thursday, hit 43 not out as Middlesex finished the game on 87-0.

Notts move seven points clear at the top of the Division One table, but have played two more games than second-placed Warwickshire.

Middlesex made no attempt to chase their target as Strauss enjoyed some valuable time in the middle, facing 113 balls and hitting seven fours.

He was dropped by a diving Chris Read in front of first slip off England team-mate Stuart Broad on 26 but otherwise batted without alarm, while Graeme Swann bowled accurately for Notts but with little threat.

"An honourable draw with the surface emerging as the winner.

"Some outstanding individual performances, notably Lumb and Mullaney for Notts and Ollie Rayner for the visitors.

"Notts, incredibly, have now played a third of their season and go top after six matches, although Warwickshire have a couple of games in hand."