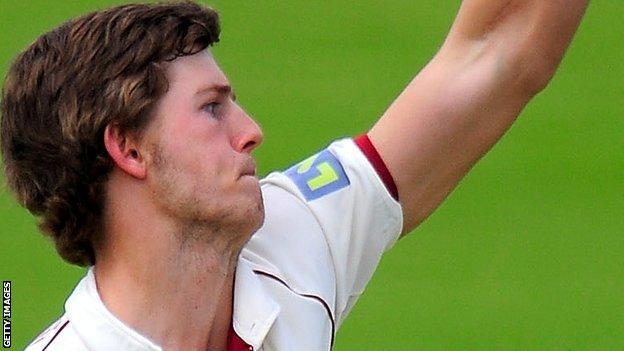 Durham battled to save a draw against Somerset after Craig Meschede's three-wicket haul gave them a fright.

Somerset took their first-innings lead to 142 as they were dismissed for 267, Craig Kieswetter with an unbeaten 96.

Durham looked set to secure a draw with ease on 144-2 in their second innings, but lost Paul Collingwood for 36 and soon slumped to 186-7, with a lead of only 44.

Ian Blackwell's 90-minute innings of 38 not out proved valuable and stopped Durham from slipping to their third defeat of the season.

"Durham's batting has been awful so far this season. But so has the weather. They've lost 11 days already and you have to say when the players batted in the sunshine in their second innings they looked more assured than they had done until then.

"That said Durham are still at the bottom and after five matches still haven't won. It will be difficult for them to make that breakthrough in their next championship match because they meet Somerset again in two weeks at Taunton.

"This could yet prove a long season for Geoff Cook and his men. Perhaps a lift in the weather may also lift their fortunes."

"It got a bit nervous when we lost a few wickets in quick succession because we were only about 60 ahead at the time, but Ian Blackwell did a great job seeing us through.

"Graham Onions also scored a good 20 which helped late on.

"It would have been nice for Ian Blackwell to go and get a few more runs, but he had an important job to do and did it well.

"I feel we are moving in the right direction. A few got 20s and 30s in the second innings. If they can now start to get bigger scores, we'll be back to where we were and back to normal."