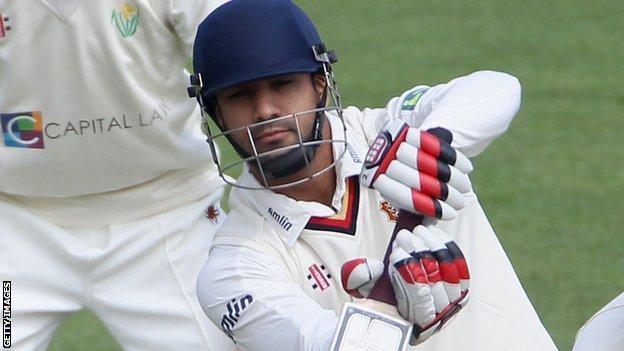 Questions marks remain over the fitness of Ravi Bopara ahead of England's first Test with West Indies as Essex and Kent settled for a draw.

Bopara, who was pencilled in to bat at number six, and emerged at number eight to bat with a runner.

Kent reached 92-2 in their second innings before the captains shook hands on a draw, Rob Key ending 40 not out.

Earlier, Mark Davies finished with figures of 4-20 in 24.4 overs and Charlie Shreck took 3-59 for Kent, as Essex lost eight wickets for the addition of only 87 runs on the final day.

Bopara, who made 19, was run out in bizarre fashion as he suddenly raced down the pitch after playing a ball from Davies into the covers.

His runner, Greg Smith, had covered the same distance alongside the edge of the square when Bopara realised his mistake and tried to return to the striker's end only to fall well short of his ground.