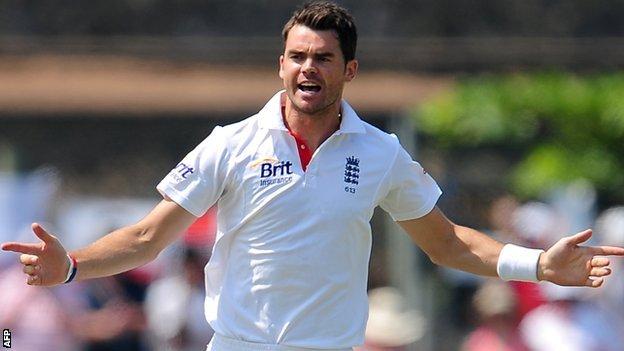 England have been ranked number one in the world since last August, but with the first Test of the summer beginning at Lord's on Thursday, Anderson says the team want more.

He told BBC Sport: "We don't just want to stay number one in the world. That's not what is driving us on.

"We actually do believe that we can become one of the best, if not the best, England team there ever has been.

"Once we finish playing we want to look back on something we can be really proud of. We want to create a legacy.

England endured a disappointing winter, losing all three Tests against Pakistan in the United Arab Emirates and drawing the two-match series in Sri Lanka after a fourth successive loss.

After a three-Test series against the West Indies beginning next week, South Africa arrive in July for three more Tests before England travel to India having not won a Test series there since 1984-5.

"Our goal for a long time was to be number one in the world," said Anderson. "Once we got there we wanted something else to inspire us and help us improve as a team.

"We want to win everything we can. Going to India in the winter is going to be a big task, because it's somewhere where we haven't been successful in the past.

"The lifespan of a cricketer is a limited one. As a bowler you've done well to get to your mid-30s. So in the next few years this team should be getting to our peak, and hopefully we can show that on the field.

"I heard that India have only lost two of the last 35 Test series they've played at home, so that's pretty daunting.

"But it's something that will drive us on to win there, as will back-to-back Ashes wins in Australia too. 2013-4 is going to be a huge 12 months for us."

Contenders for England's greatest ever Test team would include the Peter May-skippered XI which won 10 series and drew four in an eight-year period in the 1950s, Ray Illingworth's Ashes-winning squad of 1971 and Michael Vaughan's Ashes winners of 2005.

The current team have won Ashes series both home and away and thumped India 4-0 at home last summer, but have so far struggled to replicate that success on subcontinent pitches.