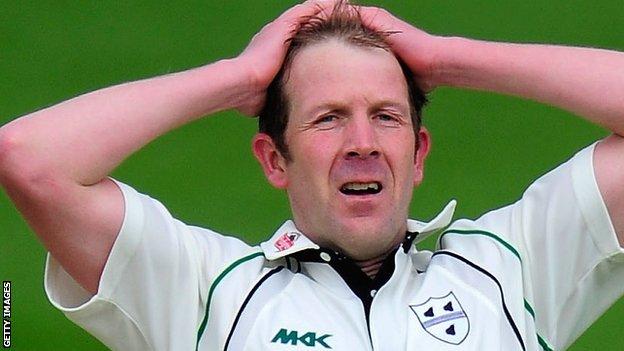 Worcestershire bowler Alan Richardson is facing up to three weeks on the sidelines with injury.

Medical tests have confirmed that the club's leading wicket-taker has sustained a tear in the back of his shoulder during the draw with Surrey.

Director of cricket Steve Rhodes told BBC Hereford & Worcester: "He's been such a wonderful performer for us.

"But knowing Alan he will be giving it his best shot to get back as quickly as he can."

Richardson took 73 wickets for Worcestershire last season and was recently named as one of the five Wisden Cricketers of the Year.

"It does give an opportunity for somebody else. Alan does bowl a lot of overs for us and he will be missed.

"But it will give somebody else the chance to step up to the plate and impress."

Jack Shantry may well push for a recall to the side in Richardson's absence, and there is also the chance that all-rounder Gareth Andrew could also be in contention.

Andrew underwent knee surgery during the winter and Rhodes says he is making good progress in his battle to return to full fitness.

"Gareth is playing league cricket today [Saturday] and he played for the second-team in the week," continued Rhodes.

"He had a little bit of a bat and a bowl and got 60 with the bat, so he is getting closer and closer all the time.

"I am hoping that with the league match today he may well be putting himself in contention for next week [against Sussex in the Championship], but we'll play that day by day."