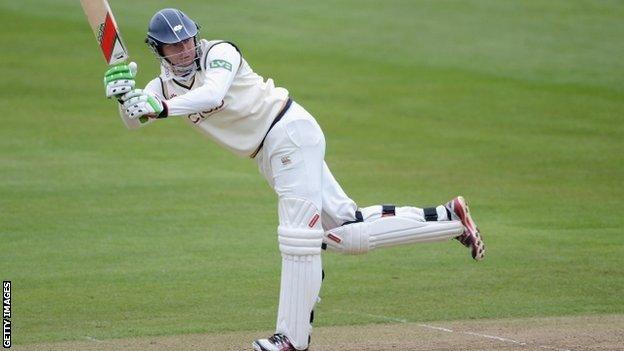 Yorkshire batsman Jonny Bairstow has been called up by England to face West Indies in the first Test of the summer at Lord's.

Bairstow, 22, has six caps at both one-day international and Twenty20 level, but is yet to make his Test bow.

He is likely to bat at number six after Ravi Bopara was ruled out by a thigh injury.

Durham pace bowler Graham Onions is the only other player in the 13-man squad who did not play a Test last winter.

But all-rounder Samit Patel, who played in both Tests in Sri Lanka, is left out.

Bairstow plays as wicketkeeper alongside his batsman duties for Yorkshire, but will be able to concentrate on scoring runs if he plays for England with Matt Prior also in the squad.

He scored an unbeaten 41 on his one-day international debut against India and was 60 not out in England's 38-run win over Pakistan in their Twenty20 meeting in February.

Bairstow follows in the footsteps of his father, David, who played four Tests for England between 1979 and 1981, including two against the West Indies.

His first-class average of 46.37 is bettered by that of Nottinghamshire's James Taylor, who is also 22.

Taylor scored 118 for England Lions against the West Indies in the first innings of a four-day match.

"We have had many conversations about that," national selector Geoff Miller told BBC Radio 5 live's Sportsweek.

"It is a tough decision but it is nice that we have got one or two lads knocking on the door to try and fill those places when they come available.

"The call was for Jonny, but that does not mean it is the end of an opportunity for James Taylor. It is just a matter of him continuing to work hard and score a lot of runs and prove us wrong."

Miller added that it was too early to be sure that Bopara would be back in contention for the second Test at Trent Bridge on 25 May after the Essex man was diagnosed with a grade-two muscle tear.

"We are not going to make any rush decision on that, we are going to let him get his body ready so he can justify a selection," he added.

The third and final Test against West Indies is at Edgbaston on 7 June, with a one-day series and Twenty20 international to follow.