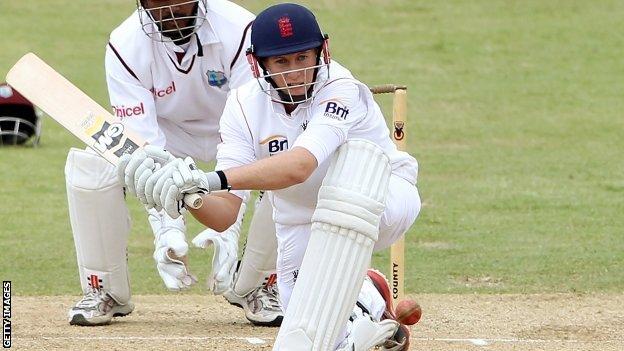 Joe Root hit his second first-class hundred as England Lions wrapped up a comfortable 10-wicket win over the West Indies.

Root (115 not out) and Michael Carberry (72 not out) wrapped up the victory with more than a session to spare at Northampton.

It puts the tourists under pressure ahead of the first Test which starts at Lord's on Thursday.

They also have injury concerns over bowlers Kemar Roach and Ravi Rampaul.

Roach took a blow on his right hand while batting on Sunday morning, to go with the ankle he twisted earlier in the match, while seamer Rampaul left the field after four overs with the new ball.

Although Rampaul returned to the field after lunch, he did not bowl for the rest of the match.

Earlier on Sunday, Lions player Jonny Bairstow was called into the England squad for the Lord's match.

After the victory, Root gave credit to his batting partner Carberry who had more to fear from off-spinners Shane Shillingford and Marlon Samuels bowling in tandem on a fourth-day pitch.

"They bowled pretty well in patches and 'Carbs' played extremely well because he was playing a lot out of the rough," he said.

"Even though he only got 70-odd it was a fantastic knock and great for us to see the team home."

The tourists' mid-match fightback faltered immediately on the final morning.

Having defied expectations on Saturday when Kieran Powell and Shivnarine Chanderpaul helped them wipe out a mammoth first-innings deficit, the tail lasted barely 30 minutes on the final day.

Matt Coles struck twice to dismiss the tourists for 390 and the Lions moved with the minimum fuss to 61 without loss at lunch and then turned on the style to wrap up the win.