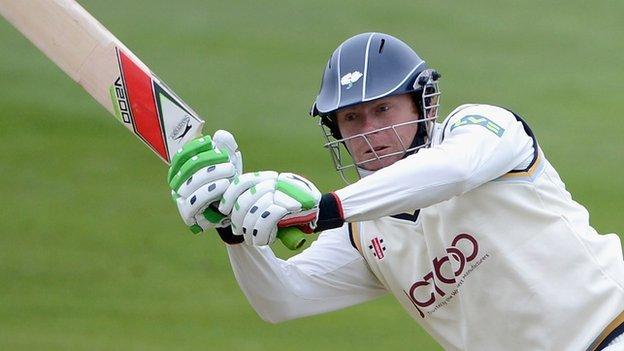 Jonny Bairstow's call-up to the England Test side is fully merited, according to Yorkshire skipper Andrew Gale.

Bairstow, 22, has been selected in place of injured Ravi Bopara and is set to make his debut against the West Indies on Thursday.

Gale told BBC Radio Leeds: "He deserves it, he's been in great form this year.

"He's a fantastic lad to have around the dressing room and we'll miss him - but that's what we're here for, to see our homegrown players come through."

Bairstow, who made 50 for the England Lions in their 10-wicket victory over the tourists at Northampton, has already played six times for the national team in the limited-overs game.

He is now set to follow his late father, wicketkeeper David Bairstow, in representing England at Test level - and if he makes the final XI at Lord's on Thursday, it would only be the 13th time that has happened.

Meanwhile, Bairstow's Yokrshire team-mates are in buoyant mood after collecting their second County Championship win of the summer in magnificent style at Bristol.

After forfeiting their first innings to set up a final day run-chase in a rain-affected match against Gloucestershire, they successfully chased down a target of 400 to win by four wickets, thanks to hundreds by Phil Jaques and Gary Ballance.

"It was a fantastic effort and fair play to Gloucestershire for setting the match up on Friday," he added.

"We're in a good place at the minute but the key thing now is that we continue this good run of form."