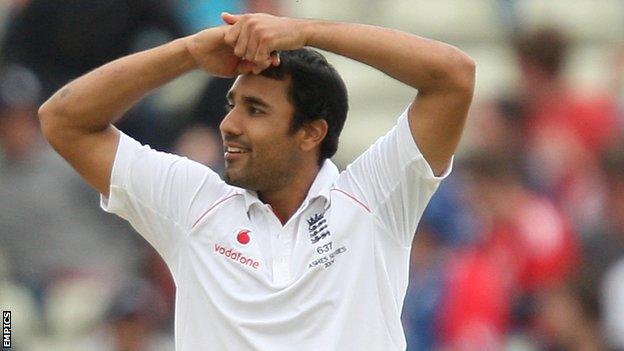 Essex coach Paul Grayson has suggested Ravi Bopara will not be fit for England's second Test against the West Indies on 25 May.

The batsman is set to miss the series opener at Lord's on Thursday after injuring a thigh muscle while bowling against Kent last week.

Grayson expects the 27-year-old to be out for up to two weeks, cutting it fine for the Trent Bridge Test.

"We're going to rest him probably for about 10 days," Grayson told BBC Essex.

"He may be fit to play for Essex in a couple of weeks' time."

That would mean Bopara is unlikely to be available until the final Test at Edgbaston on 7 June and will be expected to prove his fitness for his county before rejoining the national side.

England have turned to Yorkshire's Jonny Bairstow to bat at number six in Bopara's absence.

Meanwhile, Grayson was angered by his side's showing in Sunday's seven-wicket CB40 defeat by Worcestershire at Chelmsford, labelling it one of the poorest one-day displays under his stewardship.

"There are very few positives we can take out of it. That sort of performance is not acceptable.

"We can't sit around and feel sorry for ourselves because we've got a tough week in front of us."

Essex face Leicestershire in County Championship Division Two on Wednesday before a trip to Old Trafford for a CB40 encounter against Lancashire on Sunday.