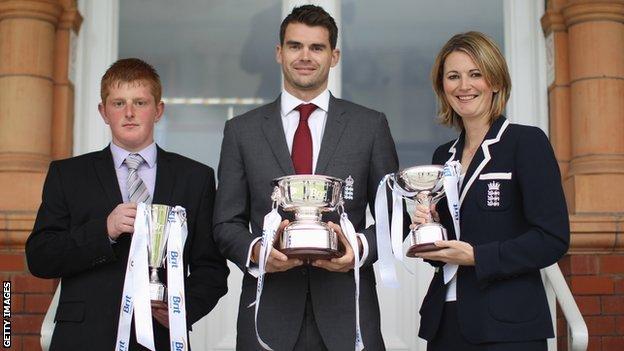 England and Lancashire fast bowler James Anderson has been named cricketer of the year for the 2011-12 season by the England and Wales Cricket Board.

In the last year Anderson took his 250th Test wicket and rose to fifth on the list of England's all-time wicket-takers in Test cricket.

"I am flattered to win this award and would like to thank everyone who voted for me," said Anderson.

Charlotte Edwards won the women's award at the ceremony at Lord's.

"In the last 18 months I've probably doubled my Test wicket tally, which tells you something about the first eight years of my career"

Anderson, 29, beat off competition from Stuart Broad and Alastair Cook to win the award which was voted by members of the cricket media.

"I have been pleased with my performances over the last year and was delighted with the way I bowled on the recent tour of Sri Lanka - but I take even greater pleasure from being part of such a successful England team," he added.

Speaking at the time former England captain Michael Vaughan told BBC Sport: "Botham's record of 383 is in the balance.

"James has to stay fit but he will play for a few more years yet and I do think he will end up as England's leading wicket-taker of all time."

Broad won the fans' moment of the year award, voted for by members of ECB's Twelfth Man fan community, for his hat-trick against India in last summer's Trent Bridge Test Match.

Edwards took the women's award after enjoying a year in which she averaged over 50 with the bat and saw her team complete a clean sweep of series wins at home and abroad.

She beat off the challenge of fellow nominees Laura Marsh, Sarah Taylor and Lydia Greenway.

Strauss led England to the top of the Test rankings on the annual cut-off date of 1 April and will accept the mace and a cheque for just over £108,000 on behalf of the England and Wales Cricket Board.

The ceremony will be led by former West Indies skipper and chairman of the ICC cricket committee Clive Lloyd.