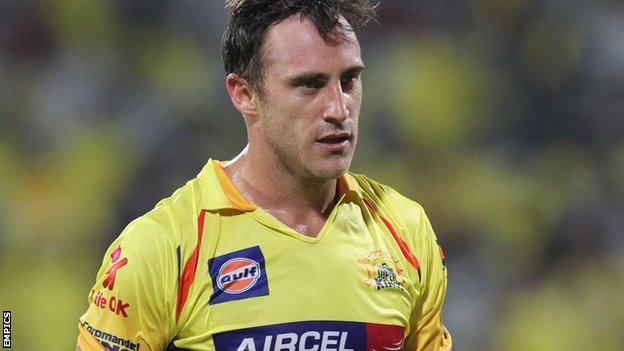 Somerset have been forced to continue their hunt for an overseas player after Faf du Plessis was asked to honour his commitments with South Africa.

The 27-year-old was signed for their T20 campaign to replace Chris Gayle, who reneged on his deal last month so he could play for the West Indies.

But Du Plessis will now feature in South Africa's tri-series in Zimbabwe.

Director of cricket Brian Rose told BBC Somerset the club will announce a new signing in the next 24 hours.

They are in the market for a second international name to join Du Plessis' fellow countryman Albie Morkel, who has been released to play by Cricket South Africa.

Gayle and Du Plessis' change of heart will pile further pressure on Rose, who is already struggling for numbers because of an injury crisis.

Marcus Trescothick is out until at least the end of June with an ankle injury, while Jos Buttler, Steve Kirby, Gemaal Hussain and Adam Dibble are also sidelined.

South African authorities have also asked that Vernon Philander's game time with Somerset is limited, so the all-rounder is fully fit to report for international duty when his time with the county ends in a month.