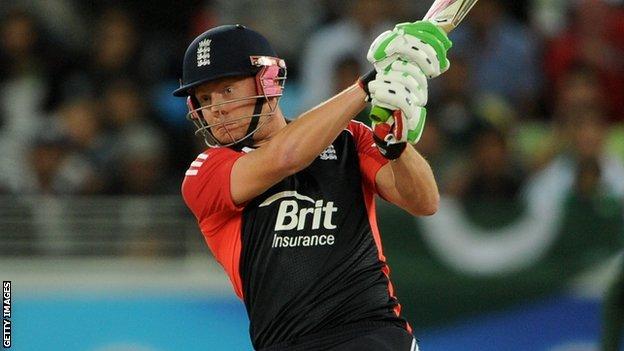 A few weeks ago, I talked about the vacancy in the England middle order and said there was a great opportunity for a county batsman to make a big hundred and jump to the front of the queue.

That is exactly what Jonny Bairstow did, with his fabulous 182 for Yorkshire against Leicestershire, and I'm delighted he's been rewarded with a Test debut against West Indies at Lord's.

When I saw him play that match-winning one-day innings on his debut against India in Cardiff last year, I thought he had huge potential. He didn't get fazed by the big occasion, he just went out and played his natural game.

I must thank the BBC for allowing me to miss a day of the Test and my old Surrey and England team-mate Mark Butcher for stepping into the BBC Radio 5 live commentary box in my place.

I couldn't miss the opportunity to watch my team on this massive occasion. I went to Moscow in 2008 and watched them lose to Manchester United, so fingers crossed I'll be going to Munich to watch them win.

I'll be back at Lord's on Sunday, either wearing my Chelsea shirt, or in jacket and tie looking a bit glum.

When you pick a player, you don't just pick them on ability or potential. You need to pick them on their mental strength and look at how they cope with everything that comes with international cricket.

Bairstow's temperament is absolutely spot-on and he has coped brilliantly with everything so far. I believe he will grow in international cricket and become an England Test regular in the future.

As is so often the case, one man's gain is another man's loss and I have great sympathy for Ravi Bopara, who misses out through injury once again.

I'm pretty sure Bopara was going to get the nod for Lord's before he injured a thigh muscle playing for Essex against Kent, but that's sport. I'm sure he will be back competing for that number six position later in the summer, and the question then will be: do the selectors stick with Bairstow or do they go back to Bopara?

At this stage Bairstow hasn't faced a ball in Test cricket so we can't call it, but we do know the selectors like to give people an opportunity once they have been selected.

Bairstow has been keeping wicket regularly for Yorkshire and he should carry on working hard on his batting and keeping skills. It is always good to have two strings to your bow, especially when you go on tour, because it means the selectors can pick another batsman or bowler.

If Matt Prior gets injured, Steve Davies is probably the next keeper in line, but if Bairstow improves his keeping, who is to say he won't be challenging for a keeping spot in 12 to 18 months' time?

Having decided on their batting line-up, England's only remaining selection dilemma for Thursday concerns their seam attack, with Tim Bresnan, Steven Finn and Graham Onions all competing for one spot.

Congratulations to Manchester City for winning the Premier League on that unforgettable Sunday. If the story-writers of Roy of the Rovers had come up with that plot, you would have said 'don't be so stupid, that's much too far-fetched'.

You could make a case for all three of them. Finn has the advantage because it is his home ground, Bresnan has become England's lucky mascot having won all 11 of his Tests and Onions is probably the most effective type of bowler on pitches that offer sideways movement.

It's a great problem to have because they are all top-class bowlers and none of them will weaken the side in any way. I honestly think they will make a decision just before the toss based on the conditions on the day at Lord's.

One man who is almost certain to play is Jimmy Anderson, who claimed this week that this England side can go on to become the greatest in the country's history.

They are absolutely determined to stay as the number one Test side for many years and leave a legacy, and that is exactly the ambition they should be having.

However, after a disappointing winter in the subcontinent, the short-term goal has to be getting back to winning sessions, winning Test matches and winning series, starting on Thursday at Lord's.