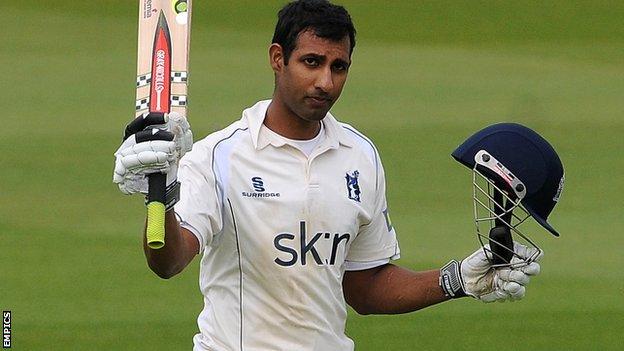 Chopra hit a patient 113 as he put on 168 for the first wicket with Ian Westwood, who made 70 for his highest score of the campaign so far.

William Porterfield added 34 from 50 balls as the hosts looked in control.

But they fell from 224-1 to end the day on 289-4 as Lancashire, who are still aiming for their first Championship victory of 2012, fought back well.

Porterfield was caught at slip by Paul Horton, Chopra picked out Karl Brown at mid-wicket and Jim Troughton was bowled by on-loan Ajmal Shahzad.

However, the visitors will be keen to quickly end a fifth-wicket partnership of 53 between Darren Maddy (29 not out) and Tim Ambrose (22 not out).

Warwickshire were without England pair Ian Bell and Jonathan Trott as they looked to claim the victory that could take them back to the top of Division One.

They were helped when second slip Stephen Moore dropped Chopra off of Shahzad when the batsman had only scored 51 and that proved costly as Chopra added another 62 before being dismissed.

"Varun Chopra's second century of the season was an impressively disciplined innings.

"He took few risks and resisted the temptation to hit out at Lancashire's spin attack when they bowled in tandem.

"Along with Ian Westwood he was efficient at gathering singles and keeping the scoreboard ticking over without giving the bowlers much encouragement.

"Chopra only gave one chance before eventually falling to possibly his first really loose shot.

"The wickets in the final session have got Lancashire back into the game to a point, but the Bears will believe they have at least one more productive partnership in them which would lift them to a commanding total."

"Lancashire should feel pretty happy with their efforts today as the close of play score isn't really a reflection on how well they bowled.

"Leading the way first up this morning was the captain Glen Chapple and Ajmal Shahzad. They bowled with aggression and accuracy and were well backed up by Luke Procter and the spin twins Kerrigan and Keedy.

"They got their rewards after tea with a good final session which sets things up nicely for day two.

"However, the big concern for the Red Rose is a potential side injury for their captain. Chapple had to leave the field late on, fingers crossed it was just a precaution."