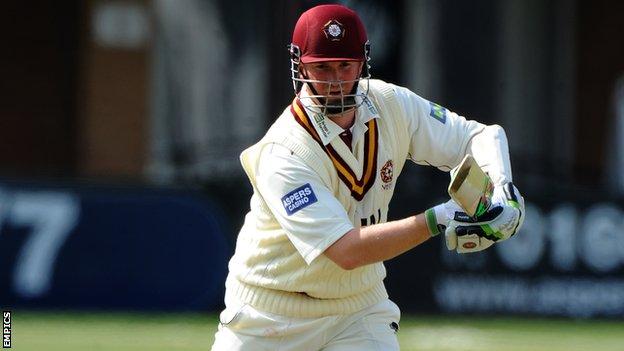 Northants' Rob Newton suffered a fractured wrist but an unbeaten century from David Sales helped the hosts take control on day one against Kent.

Newton had put on 46 with fellow opener Stephen Peters before he was hit by a rising delivery from Matt Coles.

Charlie Shreck (2-50) struck after lunch as Northants slipped to 87-4.

But Sales (104no) and James Middlebrook (57no) dug in with an unbeaten 157 for the fifth wicket, as the Kent bowlers toiled to leave Northants on 244-4.

The injury to Newton overshadowed the day for Northants.

Newton, 22, is expected to be out for between four and five weeks and is likely to miss the start of the T20 in early June.

He had needed five minutes of treatment on the field from the physio before deciding to bat on.

But when he clipped the second ball after the resumption wide of mid-on for two runs he signalled to the dressing room that the pain in his arm was too great to continue.