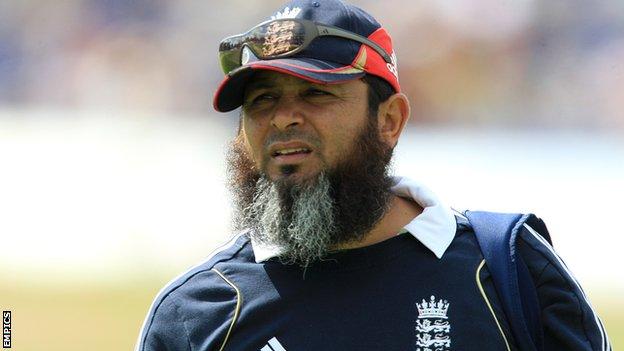 The 41-year-old, who played with Surrey team director Chris Adams at Sussex, will join the backroom team at the Oval for a month, starting on 20 June.

Adams told BBC London 94.9: "It was a no-brainer. He will be a magic guy to have around in terms of the environment in the dressing room.

"He is the most incredible and inspirational man to be around."

He added: "Mushy is a good friend who I've known a long time. When I was offered the opportunity I had no hesitation.

"We have a few young spinners at the club like Zafar Ansari and Freddie van den Bergh coming through, so there is also plenty of work to be done there as well.

"I want to set up some sessions with batsmen to talk about how to play spin."

He is the most incredible and inspirational man to be around

Mushtaq took more than 1,400 first-class wickets during his playing career, including more than 100 in a season for Sussex in 2003 and 2006.

He made 52 Test appearances for Pakistan and was also a member of the side which beat England by 22 runs in the 1992 World Cup final in Melbourne.

"He's a legend of the game and his career stats alone are incredible," Adams continued.

"There couldn't be a better time for him to come into a dressing room full of aspiring young cricketers. It's perfect and a wonderful opportunity."