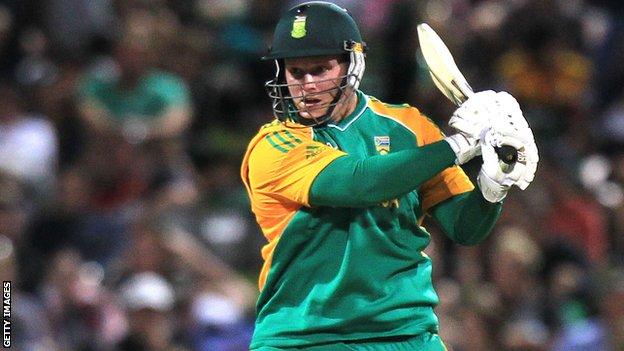 The Taunton club have had a frustrating time trying to secure a second overseas player to partner Albie Morkel.

Roelof van der Merwe was unable to obtain a visa while Chris Gayle and Faf du Plessis pulled out of deals because of international commitments.

And 24-year-old Levi could still be called up by South Africa for their T20 series in Zimbabwe later this month.

If selected, it would mean him missing Somerset's matches against Warwickshire and Glamorgan on 21-22 June.

Despite that, they are willing to live with the situation in order to recruit a player who, in only his second match for South Africa set a new T20 international record with a score of 117 not out off 51 balls against New Zealand at Hamilton in February, an innings featuring 13 sixes and five fours.

Director of cricket Brian Rose said: "It is so difficult to sign world-class players these days without them having international commitment of one sort or another.

"It was frustrating to miss out on du Plessis, particularly after what happened with Chris Gayle. But I am more than happy to have secured Richard's services and we will keep fingers crossed that nothing happens to prevent him joining us.

"Richard certainly fits the bill and is capable of making Taunton look a very small ground. I think he will be a very exciting player for our supporters to watch."