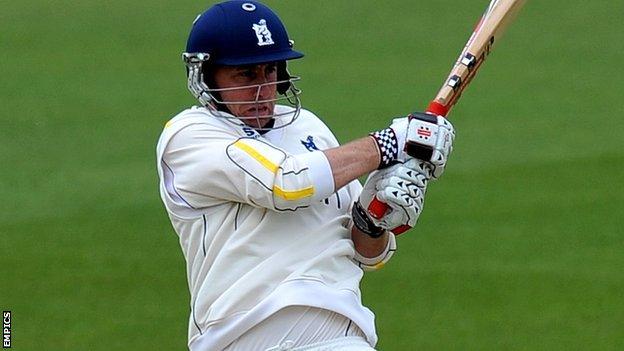 The hosts resumed on 289-4 and Tim Ambrose, who began the day on 22 not out, was dismissed for 96, while Clarke hit four sixes in his unbeaten 123.

Warwickshire declared on 557-6 as Lancashire's hopes of their first Championship win in 2012 evaporated.

Highest totals in 2012 County Championship so far this season

Lancashire made a steady start to their reply as they reached 31 without loss.

However, it soon changed as Horton was trapped lbw by Keith Barker, Brown was out without scoring in the next over and Moore was bowled by Chris Wright.

That left the visitors on 36-3, but things soon got worse as Croft was caught behind off Wright and Procter was out leg-before, as he failed to deal with a Chris Woakes delivery.

Earlier in the day, Warwickshire's Darren Maddy resumed on 29 not out but fell six short of his half-century as he picked out Ashwell Prince at mid-off.

Ambrose made his highest score of the season but was dismissed four runs away from a century, as he became one of Simon Kerrigan's three wickets when he was caught at mid-wicket by Moore.