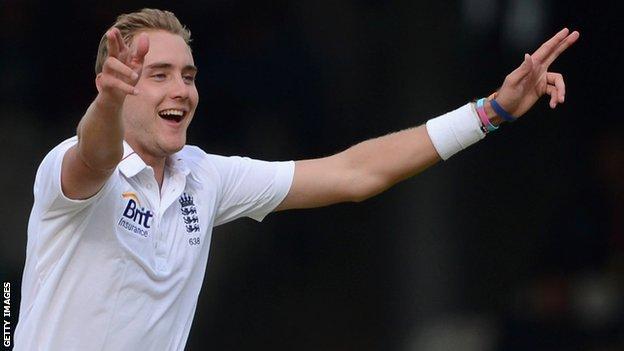 Six wickets from Stuart Broad put England in a strong position against West Indies on the opening day of the first Test despite a typically obstinate innings from Shivnarine Chanderpaul.

Once again West Indies' best batsman by a distance, 37-year-old Chanderpaul made an unbeaten 87 as they battled to 243-9 on an attritional day at Lord's.

He survived a number of close lbw shouts as well as the dreadful run-out of Darren Bravo to flourish despite Broad's excellent display.

After playing second fiddle to James Anderson in the morning, Broad returned to end the day with 6-72 in conditions that offered movement both in the air and off the pitch.

If at times it was a gentle start to the Test summer, England left the field content with their haul in a series the bookmakers expect them to win easily.

"West Indies showed the determination and the professionalism we were looking for. At least it was not the sort of frenetic batting performance we have seen from them before in these conditions."

The hosts handed a first Test cap to 22-year-old Jonny Bairstow and picked fellow Yorkshireman Tim Bresnan ahead of Graham Onions and Steven Finn, while West Indies brought in fast bowler Shannon Gabriel in the absence of the injured Ravi Rampaul.

After Andrew Strauss won the toss and decided to bowl, Anderson - newly crowned England player of the year - removed opener Kieran Powell for just five with a beauty that came back significantly into the left-hander and clipped the top of off stump.

Kirk Edwards was lbw for one, playing round a fast, full one from the same bowler, but the tourists began to mount a stern defence through the application of diminutive opener Adrian Barath and the much-heralded Bravo.

Barath arrived in England with a reputation as a shot-maker but he was content to dig in as his side took lunch on 83-2, only for Anderson to send him packing for 42 after the restart with a sharp parry and catch at gully off Broad.

Veteran Chanderpaul went into the game averaging 66 at Lord's and began with elan, but refused Bravo's call for a single to square leg early in the afternoon session that ended with both players at the striker's end.

Bravo had looked good for his 29, his batting style an uncanny echo of his cousin Brian Lara. But he was given no chance by his senior partner, and both looked on as Graeme Swann collected Matt Prior's wayward relayed throw and removed the bails.

Bravo trudged off the pitch with bat trailing, brow furrowed, leaving Chanderpaul to play the role he has made his own in the 18 years since his Test debut: dropping anchor and accumulating with minimal fuss.

Anderson thought he had Chanderpaul lbw when he shouldered arms to another vicious inswinger, only for a referral to come to his aid.

To the naked eye it appeared to be hitting middle and off, but Hawk-Eye had it missing off and Chanderpaul survived to flourish.

His fifty - his 60th in Test cricket - came up off 102 balls and, as the ball lost the last of its shine and shape, he began to attack in tandem with an increasingly punchy Marlon Samuels.

The fifth-wicket partnership was up to 81 when Samuels aimed an expansive drive at Broad, found a thick outside edge and gave Bairstow his first catch in Test cricket at point.

Denesh Ramdin followed shortly afterwards, taken at first slip by Strauss off a ball from Broad that climbed and moved away, but Chanderpaul continued to grind away, unperturbed by an lbw shout from Swann that would have sent him packing had it been referred.

His partners continued to come and go, skipper Darren Sammy well caught by Bresnan at gully off a leading edge and Kemar Roach superbly held by a diving Broad in his follow-through as he prodded at a full one.

Fidel Edwards fell to what proved to be the final ball of the day, edging to a tumbling Matt Prior, to further justify Strauss's decision at the toss.

Listen to how the opening day of the international summer unfolded on the TMS podcast.