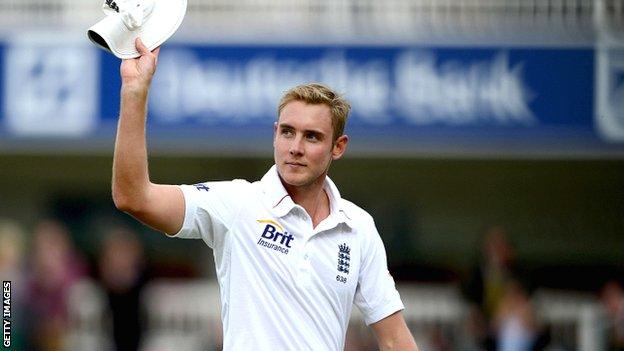 England fast bowler Stuart Broad was pleased with his team's position on the opening day of the Test summer as West Indies closed on 243-9 at Lord's.

"Winning the toss and bowling puts pressure on bowlers and it's important we realised it was never a 100 all out wicket," Broad told BBC Sport.

"We're delighted with the day, to have them nine down is really pleasing."

The West Indies reached lunch on 83-2 and were 146-4 at tea before losing five wickets in the final 22 overs of the day.

"It was still a very white wicket this morning - it didn't do a huge amount, it was quite slow and quickened up throughout the day," the 25-year-old said.

"We talked before we went out that we'd take seven down as long we bowled tidily and didn't give them too many freebies.

"In the morning session we weren't as efficient as we could have been, but then to go for only mid-50s [runs] in the middle session was really pleasing with a slightly older ball and you'd take nine down on the first day of a Test match every day of the week."

"His lines are incredible, he bowled loads of away swingers to the right handers and as soon as he tried an "innie" it was hitting the middle of middle," he said. "That's the skill of the guy now and it's really good to bowl with someone like that in your side.

"I leaked a couple too many boundaries this morning but then you had Bressie [Tim Bresnan] going at one an over so that balance really works and the guys have had a really good day."

Chanderpaul finished 13 short of his 26th Test century and Broad said: "He played the ball very late which is important when it's swinging and something we can learn from.

"It's going to be important to try and get that last wicket because he can be frustrating nine down, he hits the ball in different areas and we'll have to reassess our plans a little bit because he played beautifully."

West Indies coach Otis Gibson said: "It's been an interesting day, I thought we did some really good things in the morning session when the ball was doing a lot, but after lunch we lost a couple of wickets too many.

"We spoke about playing away from your body and some modes of dismissal would have been disappointing but 243 is not a bad score."

There were debutants on both sides at Lord's, with England handing a first cap to Yorkshire batsman Jonny Bairstow and West Indies bringing in 24-year-old paceman Shannon Gabriel following an injury to Ravi Rampaul.

"We were always looking at playing four seamers and Ravi didn't pull up well after bowling in practice so we thought we'd give Shannon his opportunity, he's been practising very well," Gibson explained.

"I know one of the things England do a lot is research opposition, and they will have very little information on him so he could be a secret weapon. He's very keen and very excited and I'm sure he's going to do well."