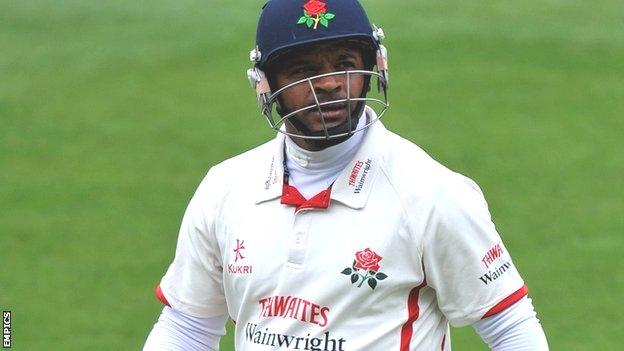 Lancashire will have to bat throughout the final day to avoid defeat in their Division One game against Warwickshire.

The visitors trail by 243 runs with seven second innings wickets remaining after having to follow on at Edgbaston.

Lancashire resumed on 61-5 and were dismissed for 197, with Ashwell Prince the only batsman to provide any resistance as he scored an unbeaten 87.

Lancashire, the 2011 county champions, have failed to win a Championship match in 2012 and need to produce a resolute display on Saturday to salvage a draw.

Their hopes could rest on the form of opener Paul Horton, who ended Friday's play on 56 not out.

He had been involved in an 89-run partnership for the second wicket with Brown (45), who was caught behind off the bowling of Chris Wright.

Prince could not repeat his first innings heroics as he only scored one run before being caught by Rikki Clarke at slip off Jeetan Patel.

Earlier in the day, Prince was the only Lancashire batsman to score more than 20 in the first innings as his side failed to collect any batting bonus points.

Chris Woakes, who was playing his first Championship game for Warwickshire since injuring ankle ligaments in March, was the pick of the home bowlers, taking 3-20 off 11 overs.