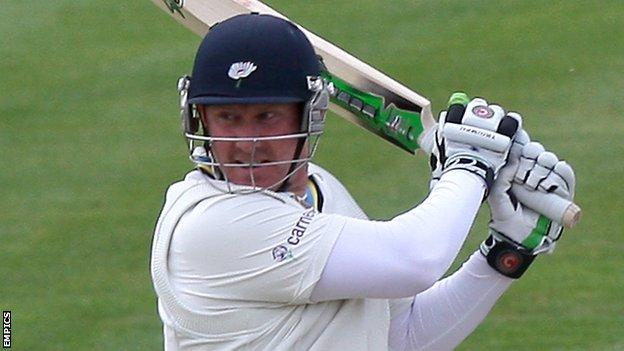 Anthony McGrath hit an unbeaten century as Yorkshire fought back on day three against Hampshire at Headingley.

But McGrath shepherded the tail expertly, hitting 106 not out in over four hours at the crease as Yorkshire declared on 399-9 to trail by 28.

Hampshire extended that lead to 49 as they reached the close on 21-1, Liam Dawson the man out.

McGrath's ton came exactly 17 years to the day that he made his first-class debut for the county against Glamorgan at Bradford.

He offered only one chance before reaching three figures - his 33rd first-class ton for Yorkshire - too, when Simon Katich put down a simple catch at first slip after McGrath edged Kabir Ali.

And his innings proved vital given that at one stage his side were 237-7, needing 41 more to avoid the follow-on.

They comfortably negotiated that threat in the end and will head into the final day with all three results possible.

There was also a notable milestone for Australian Jacques, who passed 14,000 first-class runs when he reached 86, but he missed out on a second successive century when he was caught round the corner off Dawson to end a stand of 149 for the fourth wicket with Ballance.