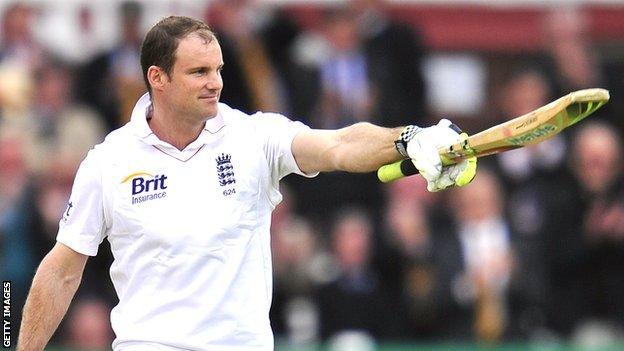 A first Test century in 18 months from captain Andrew Strauss put England in a dominant position on day two of the first Test against a toothless West Indies.

Strauss ended the day unbeaten on 121 as England reached 259-3, a lead of 16 runs, with Ian Bell alongside him on five.

The skipper started the week fielding questions about his form and place in the side, and he provided the best riposte of all - batting for all but one ball of the day for his first hundred in 26 Test innings.

"There had been talk of a media witch-hunt against the England captain but that is utter nonsense. There isn't a person in the media who I can imagine having any feelings against Strauss. He is a likeable and thoroughly professional man who demands respect."

He was kept company by a typically patient half-century from Jonathan Trott and a more flamboyant cameo from Kevin Pietersen, but this was undisputably Strauss's day.

He was rewarded for his long-awaited landmark with a standing ovation from the sell-out Lord's crowd that was as heartfelt and sustained as the old ground has seen in an age.

If Strauss left the field with a broad smile on his face, this was another chastening day for West Indies.

Conditions appeared favourable for swing bowlers, but the tourists' attack could not find a cutting edge to match their effort.

Stuart Broad had wrapped up the West Indies innings with the first ball of the day to record Test-best figures of 7-72.

It meant a golden duck on Test debut for Shannon Gabriel, caught comfortably at second slip off the outside edge, and left Shivnarine Chanderpaul high and dry on his overnight 87.

It also makes Broad the fifth Englishmen along with Andrew Flintoff and Ian Botham to have recorded both a Test century and five-wicket haul at Lord's and thus make it on to both batting and bowling honours boards.

Strauss and Alastair Cook progressed in untroubled fashion during the morning against Fidel Edwards and Kemar Roach until, with the score on 47, Cook slashed at one from Roach that was too close to cut and played on for 26.

If Strauss felt under pressure it did not manifest itself in his display at the crease. Twice he drove with sweet timing to the mid-on boundary, and he brought up his half-century off 97 balls with a glance off the hips for four more.

Most Test hundreds by English batsmen

Trott was settling in for the long haul at the other end, unperturbed by an lbw referral from Darren Sammy that was rejected despite Hawk-Eye suggesting the ball would have hit a decent chunk of leg stump.

The number three also survived what looked to be a thin edge behind that even wicketkeeper Denesh Ramdin failed to appeal for, and in his usual fidgety fashion moved to his 10th Test fifty, off 109 balls, just before the tea interval.

The West Indies bowlers were struggling to extract any movement from a flat track despite the clouds parked up above.

Skipper Sammy went on the defensive with his side's lead still in excess of 100, leaving just one slip in for paceman Edwards, but with a lack of energy from his field the England pair were able to accumulate in untroubled fashion.

After 87 runs had come from 28 overs in the afternoon session, the scoring rate continued to plod along in a pedestrian evening session.

Strauss looked edgy as he moved slowly through the 80s and 90s, wafting dangerously at two wide ones from Edwards before driving sweetly back down the ground for a steadying four.

But the standing ovation that Friday's full house gave Andrew Strauss as he celebrated his first Test century in a year-and-a-half was as long and as loud as any at headquarters in an age.

He then edged Edwards to slip off a no-ball - and was dropped to boot - before Trott went for 56, driving at Sammy and edging behind to Ramdin.

Sammy then dropped short outside off and Strauss cut for four, punching the air and being embraced by his partner Pietersen as the full house at Lord's rose to salute him.

It was the first time he had reached three figures since making 110 against Australia in the opening Ashes Test at Brisbane in November 2010.

Pietersen perished to an undisciplined cut shot off spinner Marlon Samuels for 32 but, with seven wickets in hand and the forecast set fair for the weekend, England will expect to compile a match-winning total.