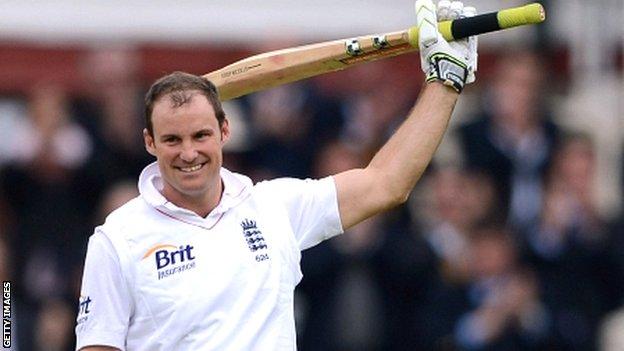 Captain Andrew Strauss admitted it was a huge relief to make his first Test century since November 2010 as England scored 259-3 against the West Indies.

"It's a bit of a monkey on your back, you're keen to get rid of it if you haven't scored a hundred for a while," said Strauss, who hit an unbeaten 121.

"The last 15 runs or so were quite tortuous - I didn't enjoy that at all.

"We want to make use of the conditions, hopefully bat long, get a big score and put West Indies under pressure."

England, who will play three Tests, three one-day internationals and a Twenty20 international against the Windies, closed day two of the first Test with a lead of 16 runs.

The time had come for Strauss to perform and he knew that.

"It was important for the side that we went on and got a decent score," said Strauss, playing his 95th Test.

"It was important for myself; as captain you want to lead from the front - you want to set the example.

"And that's why it was a great feeling of relief and release to get that hundred."

Since making 110 against Australia in Brisbane 18 months ago, Strauss had played 25 innings and scored 717 runs at an average of 28, with six fifties.

"All hundreds are special," he said. "When you haven't got one for a while it's harder to get to three figures."

The 35-year-old skipper was asked how his 20th Test century compared to the 177 he made in New Zealand in March 2008 when his place in the team was in jeopardy.

"In Napier it was more do-or-die time," he said.

"At the start of this summer it was important that I re-established myself as a batsman.

"I've taken a step to doing that today but there's still a lot of hard work to do."

Like the rest of his batsmen, Strauss struggled in the United Arab Emirates in the series against Pakistan during the winter, scoring 150 runs in six innings, and also had a modest return in Sri Lanka with 114 runs from four innings.

The 3-0 defeat against Pakistan and a 1-1 draw in Sri Lanka led some critics to question whether changes were needed in the England batting line-up and Strauss admitted: "It was a talking point.

"It's just really nice to get a few and I feel in good nick."