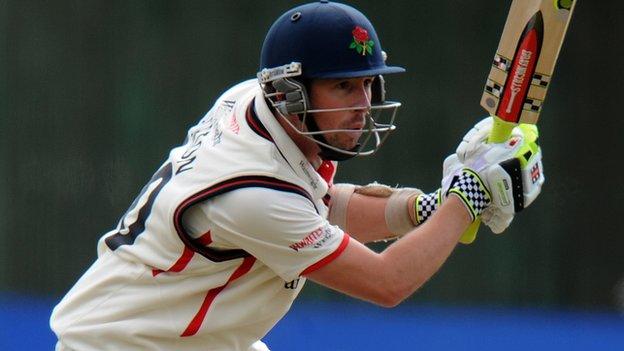 Paul Horton scored a resilient century to save Lancashire from defeat against Warwickshire, although the Bears still reclaimed top spot in Division One.

He was helped by Gareth Cross, who scored 75 not out, while Luke Procter added 34 and Steven Croft made 21.

Warwickshire, who piled up 557 in their first innings, have moved two points clear of Nottinghamshire at the top.

Horton's century was his 14th in first-class cricket but his first in the Championship since April 2010.

Lancashire, who remain without a victory in six County Championship matches, have slipped to second bottom, but will be hoping that Saturday's defiance can kickstart their season.

After a 45-minute delay for rain at the start of the day, Rikki Clarke took a one-handed catch at second slip to claim the wicket of Croft.

Procter was the only other wicket to fall, trapped lbw by Darren Maddy.

But an unbroken partnership of 139 between Horton and Gareth Cross guided Lancashire to safety.

Warwickshire have a game in hand on second-placed Nottinghamshire, who were not involved in this latest round of matches.

"A monumental match-saving innings by Paul Horton, which could just be the catalyst which kickstarts Lancashire's season.

"Horton batted for over seven hours, a brilliant knock well supported by Gareth Cross, to see Lancashire over the line.

"Lancashire have had a tough start to the season, but have played enough good cricket to feel sure wins are around the corner. And Horton's resistance could be a much-needed boost ahead of this week's game against Middlesex."