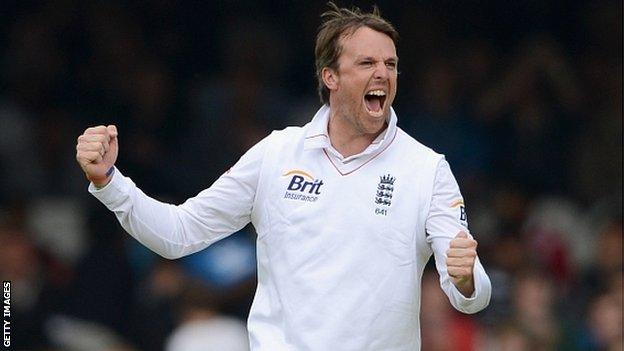 England are closing in on victory in the first Test at Lord's after reducing West Indies to 120-4 - still 35 in arrears - with two days to go.

Only Shivnarine Chanderpaul, with a typically dogged unbeaten 34 from 95 balls, and Marlon Samuels (26 not out) offered sustained resistance on a pitch that has flattened out the longer the game has gone on.

The obstinate Chanderpaul survived a brace of early edges and a late referral for lbw to frustrate England but, with time on their side and the West Indies tail weak, a home win remains the most likely outcome.

Stuart Broad, Tim Bresnan and Graeme Swann took a wicket apiece on a day that began with a flurry of wickets and runs before fizzling out into a battle of attrition.

England added a further 139 to their overnight 259 to open up a first-innings lead of 155, thanks in part to Ian Bell's patient 60.

"Shiv is a guy that will stay in and hang around. The guy is a very accomplished player and he can play. He likes batting and he can bat all day.

"It was an excellent day's cricket dominated by the bowling of both teams. The bowlers were excellent. The quality of pace, line and length was pretty good."

After a steady start from openers Adrian Barath and Kieran Powell, the wheels came off the West Indies reply in dramatic fashion just before tea.

First Barath fell, tempted into a little poke outside off stump to a Bresnan delivery that did just enough off the seam to take the edge.

Powell followed in the next over, top-edging a hook off Broad to Ian Bell at deep square-leg, and then Kirk Edwards found himself stranded mid-pitch after a mix-up with Darren Bravo as Jonny Bairstow threw down the stumps brilliantly from cover.

Three wickets had gone down in nine balls without addition to the score and, with England's lead still 119, the die was cast.

Chanderpaul and Bravo dropped anchor, adding only 20 runs in the first hour after tea, but another misjudgement cost them dear as the younger man shouldered arms to Swann's arm ball and was bowled for 21.

"Chanderpaul clings to that crease like a limpet. He must be infuriating to bowl at - he leaves and leaves, prods and prods, and then as soon as you bowl something just a fraction fuller, he drives you away for four. He just never misses out."

As on so many occasions in his 18-year Test career, Chanderpaul continued with remorseless concentration, Samuels happy to copy his example as the pair fought to survive to the close.

The West Indies attack, benign on the first two days, had earlier found its bite on an overcast morning and made immediate inroads into the England top order.

Andrew Strauss added just one to his overnight 121 before he was caught behind off Kemar Roach, 'HotSpot' indicating on the referral that the ball had found the inside edge on its way through to Denesh Ramdin.

If there was regret in the full house at Lord's that the skipper could not go on to make a maiden Test double-hundred, there was further disappointment when Jonny Bairstow's debut ended on 16 when he was trapped lbw by Roach.

The Yorkshire tyro had settled quickly, timing away a sweet four off his pads and then square-driving for four more.

But he was beaten by one that was angled in and beat his firm push, and, when Matt Prior and Tim Bresnan went in quick succession, England had lost four wickets for 64 runs.

West Indies lost three wickets in the space of nine balls after a solid start to their second innings:

Prior aimed an airy drive at a straight, full ball to give Shannon Gabriel his first Test wicket, while Bresnan was tempted by one from Darren Sammy that moved off the pitch to find the edge.

Swann had other ideas. Fed a succession of full deliveries after fending off a beamer from Edwards first ball, he battered a rapid 30 off 25 balls, including six fours, in a 55-run partnership with Bell for the eighth wicket.

Bell breezed to his half-century from 94 balls before Swann was bowled by Gabriel, and Bell followed in the burly bowler's next over when he looped a mishit pull to the diving Powell sprinting in from deep square leg.

With the lead extended past 150, England were back in total control - a position they did not look like relinquishing for the rest of the day.

Listen to how the third day of the international summer unfolded on the TMS podcast.