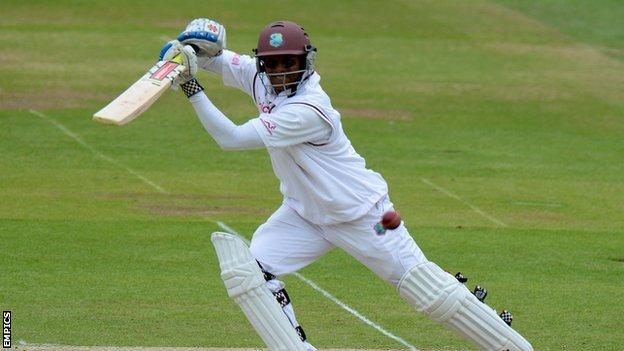 Ian Bell believes taking the wicket of Shivnarine Chanderpaul holds the key to England wrapping up victory over West Indies.

After hitting an unbeaten 87 in the first innings, Chanderpaul produced a 34 to settle his team, who trail by 35 runs after three days at Lord's.

Bell thinks the veteran's contribution will be vital again on Sunday.

"He's the big wicket that we want. He's got the class and the fight to play well," Bell said.

"If we can create some pressure, we're only one or two away from their bowlers and we can get wickets in clusters."

"Chanderpaul clings to that crease like a limpet. He must be infuriating to bowl at - he leaves and leaves, prods and prods, and then as soon as you bowl something just a fraction fuller, he drives you away for four. He just never misses out."

Bell hit 61 before being caught by Kieran Powell off the bowling of debutant Shannon Gabriel as England made 398 in their first innings.

At one point West Indies, who trailed by 155 at the start of their second innings, were just 36-3 but Chanderpaul's solid effort helped take the sting out of England on the way to 120-4 at the close of play.

Bell, however, declared himself happy with his team's progress.

He added: "I've got into some nice rhythm since I've been at home and I've got some country cricket under my belt. It was good to contribute to a first-innings lead.

"We played well again, bowled well got the ball in the right areas and with a little bit of luck would have had two more wickets.

"We've got to come back, hopefully there won't be any rain and the conditions will be right for some swing bowling."

Gabriel is sure that his team, with Chanderpaul and Marlon Samuels still unbeaten, will continue their defiance on day four.

He said: "Shiv and Samuels are both experienced, the team is backing them to go all the way and bat as long as possible."

Listen to how the third day of the international summer unfolded on the TMS podcast.