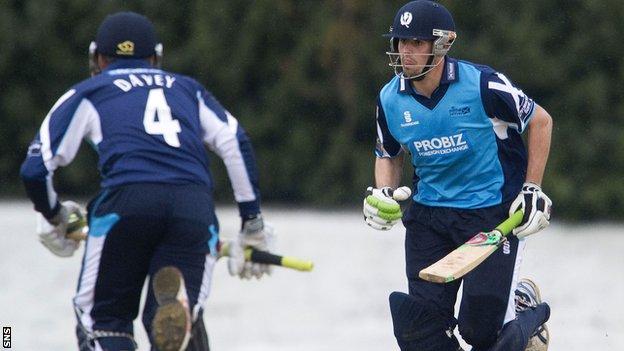 Scotland were thrashed by 89 runs in Sunday's Clydesdale Bank 40 clash with Hampshire at Uddingston.

Michael Carberry top-scored with 76 Hampshire finished on 220 all out with two balls of their innings remaining.

But the Saltires could not mount a credible challenge, making just 131 from 33 overs.

Onlly Jean Symes (33) and Preston Mommsen (22) put up any kind of fight on a day when all six Hampshire bowlers took wickets.

Kabir Ali, with two for 17 in six overs, and Danny Briggs - who returned two for 31 in eight - were the pick of the bowlers, while Majid Haq took three wickets for Scotland.

Josh Davey was first man out for 13, bowled by Ali, before his opening partner Calum MacLeod was run out with the total at 28.

That left the score at 58 for four, but Symes and Mommsen (22) dug in to extend the total to 94 before Symes - who batted for 48 deliveries and hit four boundaries - handed Chris Wood a wicket.

Another run out and two tail-end scalps for Briggs ended the disappointing chase with seven overs remaining.

The visitors made a swift start to their innings and were 66 for one in the ninth over when Jimmy Adams was caught behind by Craig Wallace off Gordon Drummond.

James Vince joined Carberry in the middle and attempted to continue the rapid pace of the scoring and made good progress before being bowled by Haq.

Simon Katich (six) was trapped leg before wicket by the Scotland spinner after facing just eight balls, and Sean Ervine faced just a solitary delivery and was bowled with the next ball.

Carberry could only watch on from the non-striker's end but some stability was restored when Dawson joined him in the middle.

Dawson kept the scoring going, but fell for 16 when he was caught by Drummond off the bowling of Mommsen.

Carberry was running out of partners when Wood (four) and Michael Bates (two) fell in successive Davey overs and the opener finally perished himself in the 33rd over following an innings which featured 10 boundaries.

Ali (32) and Briggs (17) attempted to steer the visitors to a respectable total but both fell to Symes in the final over.