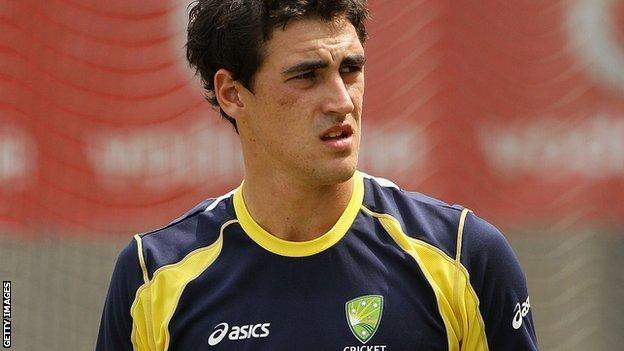 Yorkshire bowler Mitchell Starc was pleased to get his career at Headingley underway with victory over Derbyshire in the CB40.

Starc, 22, ended with figures of 3-28 as his new county eased to an eight-wicket victory.

"It was a good result for the boys. It was great to just get out there," he told BBC Radio Leeds.

"I was keen to just get off the plane and get playing cricket and I think this run of one dayers suits me."

The Australian international suffered a delay to starting his Yorkshire stint after a visa error led to him having to fly straight back to Australia after first arriving in England.

He was impressed by the performance of young batsman Gary Ballance, who hit an unbeaten 77 from 60 balls to help the side to victory.

"We knew if we took it to the end we'd be in with a great chance and we thought we bowled pretty well and Gary played really well to see us home in the end," he said.

"It's a good start and I'm looking forward to getting more bowling under my belt and hopefully playing some County Championship games pretty soon."

Yorkshire continue their CB40 campaign at Sussex on Thursday.