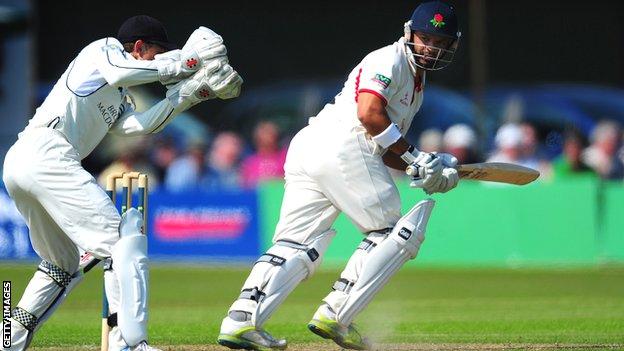 Ashwell Prince's first century of the season put Lancashire in the box seat against Middlesex at Aigburth.

The hosts stumbled to 55-3 as two wickets fell in the space of three balls at the top of the order, including Karl Brown.

But Prince (121 not out), who had already scored four half-centuries this season, and Steven Croft (78) put on 176 for the fourth wicket.

Ashwell Prince will have his eyes set on surpassing his highest score for Lancashire, which currently stands at 135

Last year's champions were boosted by the inclusion of captain Glen Chapple, who was given the all-clear to play following an injury to his left side.

After Chapple won the toss and elected to bat, Paul Horton and Stephen Moore put on 36 for the first wicket.

But Horton was the first to go when he was run out by Joe Denly's direct hit at the striker's end from cover.

New batsman Brown lasted only two balls before falling to Murtagh in the next over and Moore soon followed for 25.

Croft and Prince then stayed together for 76 overs, the latter notching his 32nd hundred in first-class cricket and his third in the Championship for Lancashire.

The decision to take the new ball by Middlesex at the start of the 85th over paid immediate dividends when Murtagh had Croft caught behind prodding forward to the first ball.

Luke Procter and Prince saw Warwickshire to the close, 24 runs short of a third bonus point.

"A brilliant unbeaten century from Ashwell Prince capped a really good day for the champions.

"He later admitted he'd missed out on a ton the last 10 times he'd scored a half-century. But he'll have his eyes set on surpassing his highest score for Lancashire, which currently stands at 135.

"His partnership with Steven Croft, who played superbly for his 78, has given Lancashire the platform to build a big first-innings score."

"It was an attritional first day but one that saw the batsman dominate in the end.

"Having won the toss, Lancashire may have been slightly nervous on 55-3 with an hour played, but Ashwell Prince's unbeaten century put his side in the ascendancy.

"Runs were hard to come by but not as hard to find as wickets, as both teams had to persevere on a slow track. And Middlesex will need quick scalps in the morning if they're to keep Lancashire in sight."