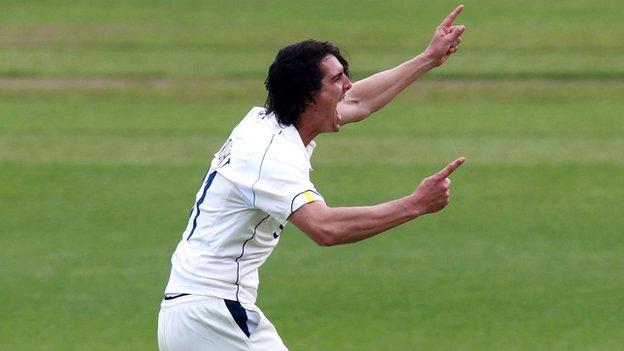 Warwickshire paceman Chris Wright claimed another three wickets as the County Championship leaders enjoyed another dominant day at The Oval.

Wright took the last two Surrey wickets to fall to finish with 3-42, while fellow seamers Chris Woakes and Keith Barker claimed a brace apiece, as the home side were bowled out for 223.

No Surrey batsman got past 40, Tom Maynard top scoring with 39.

Varun Chopra hit an unbeaten 59 as the Bears closed looking well set on 106-1.

After the early loss of former skipper Ian Westwood, Chopra and William Porterfield (32not out) have so far put on 89 for the second wicket.

Having won the toss, Surrey lunched on 134-3, Steven Davies making 34 before being run out trying to work a ball from Oval old boy Rikki Clarke off his hip to short fine leg.

But the home side then suffered a bit of afternoon indigestion.

Having added 50 in 13 overs in tandem with Surrey skipper Rory Hamilton-Brown, Jacques Rudolph was caught behind off an inside edge.

And two overs later, after being involved in a mix-up with Maynard, Hamilton-Brown was beaten by Jim Troughton's throw to the batsman's end from mid-on to be run out for 34.

Chris Jordan edged to first slip without scoring before Gareth Batty was trapped on the crease by Woakes, while Maynard was caught behind for 39, trying to run a delivery from Barker down to third man.

Lewis made 37 before a lack of foot movement proved to be his undoing when he was caught behind off Wright, who then also snared Jade Dernbach in the same manner.

"The approach of the two teams to batting on the first day contrasted sharply. Surrey perhaps overestimated how good a batting track it is and looked to score rapidly from the start. At first, it looked positive, in the end it was wreckless.

"The Bears on the other hand started maybe over cautiously and looked in danger of being bogged down at one stage. But, by the close, they had broken free of the shackles and have a chance of taking control of the game.

"Wawickshire's cause has been helped by another good performance in the field. Two run-outs took their tally to five this season."