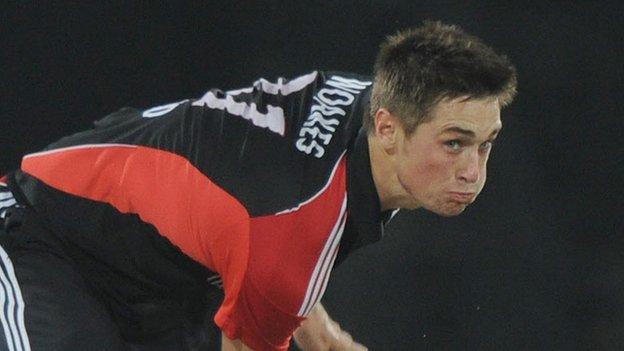 "They're very different and Jeetan Patel gives us excellent control as well as the ability to take wickets."

Warwickshire now take on Surrey at The Oval, starting on Wednesday.

With England hopeful Woakes having reported no ill effects from last week's drawn Division One game against county champions Lancashire, where he took four wickets and hit 43 not out in his comeback game after seven weeks out with an ankle ligament injury, the Bears expect to be unchanged.

It would be nice to be a few more points ahead. But it's always nice to be greedy. We are top of the table with a game in hand and it's a very big game coming up now

Pace bowler Boyd Rankin, Warwickshire's other pre-season injury, will travel with the squad as he continues his rehabilitation but is not expected to play before this year's FLt20 starts for the Bears on 13 June.

The Bears go into the match with a two-point lead at the top of the Championship. Giles believes that last season's second-place finish in Division One means opponents are viewing them differently.

"There were probably stages last season where sides didn't give us much or any credit," he told BBC Coventry & Warwickshire.

"They're certainly giving us a bit more credit now, probably doing their preparation a bit better against us.

"If you're playing against a top side you're less likely to give points away. You're going to scrap for everything you can."

Returning to the county where he started his career, Giles is happy to be in charge of a side who have once again nipped above Nottinghamshire to go top of the table.

But he admitted to some frustration they could not finish Lancashire off on Saturday and claim their anticipated innings victory.

"It would be nice to be a few more points ahead," added Giles. "But it's always nice to be greedy.

"We are top of the table with a game in hand and it's a very big game coming up now."