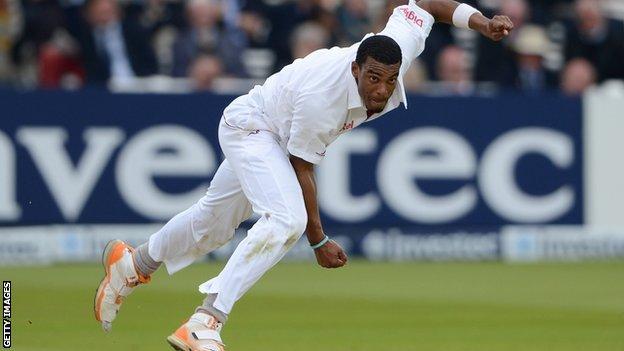 West Indies seamer Shannon Gabriel will miss the rest of the Test series against England because of a back injury and be replaced by Tino Best.

Gabriel, 24, took four wickets on his Test debut at Lord's but did not bowl after lunch on the final day.

A scan after England's five-wicket victory in the first Test revealed a stress reaction in the lower spine.

Best, who has 14 Test caps and made 12 one-day international appearances, will arrive in England on Wednesday.

The 30-year-old was recalled to the West Indies one-day squad to face Australia earlier this year but did not play a game.

Tino Best, 30, played the last of his 14 Test matches in 2009. Having been dropped in 2005, his 2009 recall came in a makeshift Windies Test XI when the majority of senior players were on strike because of a pay dispute

Gabriel shone with the ball in the first innings at Lord's, taking 3-60 runs as England were dismissed for 398.

The right-arm fast-medium bowler took the key wicket of Kevin Pietersen in the second innings as his side pushed the hosts all the way.

West Indies team physiotherapist CJ Clark said: "Shannon made the complaint late in the first Test against England and scans conducted following the match showed a stress reaction in the lower spine.

"He was subsequently ruled out of the second Test and, after further consultation, we feel that to prevent this injury developing any further it is in Shannon's best interest for him to return to T&T [Trinidad and Tobago] for rest and rehabilitation to ensure he is fully fit when selected for West Indies in the future."

The second Test of the three-match series starts at Trent Bridge on Friday.