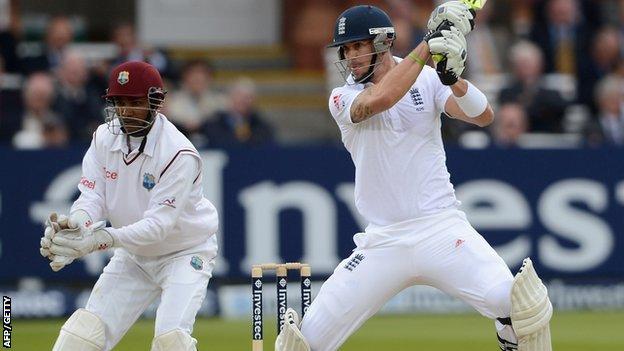 Kevin Pietersen has praised England's bowling attack after a West Indies fightback gave his side an unexpected fright in the first Test at Lord's.

England were in trouble at 57-4, chasing a target of 191, before a partnership of 132 between Alastair Cook and Ian Bell saw them home.

Pietersen said: "Our bowlers are a fantastic unit. To get 20 wickets on a pitch like that was magnificent.

"Lord's is a hard place to win a Test because it's a good batting wicket."

Having reduced the tourists to 36-3 in their second innings, still 119 short of making England bat again, Andrew Strauss's men were frustrated by another epic innings from veteran Shivnarine Chanderpaul and dogged contributions from Marlon Samuels and Denesh Ramdin.

But 11 wickets in the match from Stuart Broad - including career-best figures of 7-72 in the first innings - in partnership with England's newly crowned player of the year Jimmy Anderson proved pivotal in unhelpful conditions for pace bowlers.

"Anderson and Broad are right up there as the best new-ball pairing in the world," said Pietersen.

"You've obviously got Dale Steyn and Morne Morkel too, but Anderson and Broad have done it really well and done it well for a long time.

"In our conditions they are fearsome. Who would I rather face, Steyn and Morkel or Anderson and Broad? It's really tough. All four are world-class bowlers, and having them all together bodes well for the summer ahead."

England are likely to field an unchanged XI for Friday's second Test at Trent Bridge, which will mean a second Test appearance for Lord's debutant Jonny Bairstow.

The young Yorkshireman made just 16 in England's first innings but ran out Kirk Edwards with a direct hit from cover as his side made early inroads into the West Indian top order on day three.

"He's got a good temperament, he talks the right language and he's got a positive attitude," said Pietersen. "In the nets he hits the ball hard and in good areas too.

"He looks like he's got a very good head on his shoulders, which is one of the most important things about succeeding in international cricket.

"I think our dressing room is a very welcoming one. Both coach and captain, and all the senior players, we've made it like that so whoever comes in, even as 12th man, feels part of the team.

"I don't think he needed the run-out to feel part of the team - I think he's felt that since he's got involved.

Pietersen spent the morning after the win at the Johanna primary school in south London, playing cricket with schoolchildren as part of National Cricket Day - an initiative of the Chance To Shine programme, which aims to get cricket back into state schools.

"When Trott and Pietersen were out, that was looking pretty dangerous for England - there was every chance West Indies might win. If they'd got one more wicket, with Bairstow coming next, they were very much in the game."

Research a decade ago showed less than 10% of the country's 21,000 state schools were playing any form of cricket.

"For cricket to get into the state schools here is huge for our game, because I think we might have been missing a lot of talent," said Pietersen.

"I was fortunate enough to grow up in South Africa, where you take it for granted that that you have great access to sport whatever sort of school you go to. The facilities are better because you have more space, the weather's better.

"It's great for the kids, because it creates camaraderie, it improves their sporting skills, and they become proper mates. They get that little competitive edge which I think is really important when you're growing up."