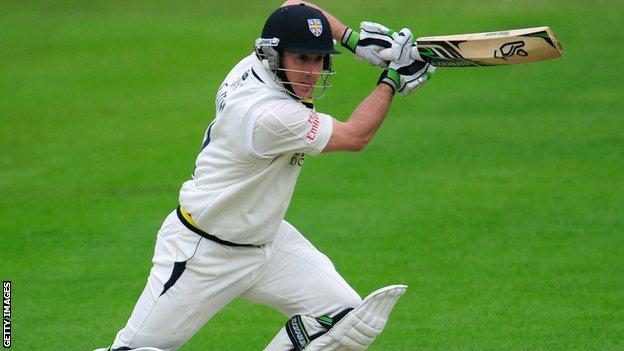 Will Smith hit a century as Durham took control on the first day of their County Championship Division One game with Somerset.

Somerset fought back hard by taking six wickets in the final session, Peter Trego and Jamie Overton claiming two each at Taunton.

Ben Stokes hit an attractive 60 off 79 balls before being run out.

Smith struck 12 boundaries and two sixes in a patient innings to become the first Durham player to hit a century in the competition this season.

Somerset paid a heavy price when Trego dropped Di Venuto in the slips off Alfonso Thomas when the batsman was on 38.

But it was a rare moment of alarm for the openers as they took the score to 128 off 32 overs by lunch, Di Venuto outscoring his partner to be unbeaten on 81 at the interval.

The left-hander looked on course for a certain century when, four short of the milestone, he edged an attempted cut shot off Thomas through to wicketkeeper Craig Kieswetter.

"Obviously losing eight wickets is disappointing but on the positive side of things we've got a score on the board which helps," Smith told Durham County Cricket Club's website afterwards.

"If the last two wickets can eke out another 50 then we'll definitely be in with a good shout."