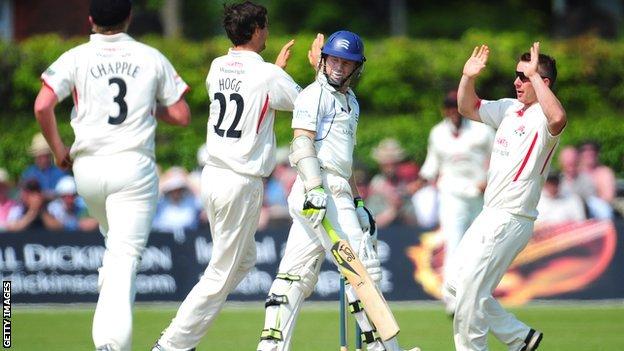 Eoin Morgan failed with the bat on his return to first-class cricket as Lancashire stayed on top of Middlesex.

The hosts resumed day two on 276-4 but after Ashwell Prince (144) had passed his highest score for the county, they lost six wickets for 71 runs.

The left-hander is playing in his first first-class match since being left out of the England Test team.

Earlier in the day, Lancashire looked set to pass 400 for only the second time in the Championship this season, but lost momentum following Prince's dismissal with the score on 321.

Rayner was key in ripping out the middle order, including the wickets of Luke Procter (39) and Gareth Cross (41).

Kyle Hogg then struck with his second ball of the Middlesex reply to get rid of Chris Rogers for one.

Shahzad removed Joe Denly and Morgan, playing in his first game since being dropped by England, in a fiery six-over burst at the start of the evening session.

Neil Dexter (33 not out) and John Simpson (28 not out) have so far put on 60 for the sixth wicket, but Middlesex still have a lot of work to do to come close to Lancashire's total.

"Another good day for the defending champions on a glorious afternoon for cricket in Liverpool.

"They pushed their total up towards 400 thanks to Ashwell Prince's highest score for the county and his third century. This was combined with some good work from Steven Croft and Luke Procter.

"Since then, Lancashire have made big in roads into defending that first-innings total. Seamers Glen Chapple, Kyle Hogg and Ajmal Shahzad appeared to be able to get more out of the pitch than their Middlesex counterparts.

"Shahzad has two wickets so far including that of Eoin Morgan in spectacular style. The England man seeing his leg stump knocked out of the ground and Shahzad celebrated in style."