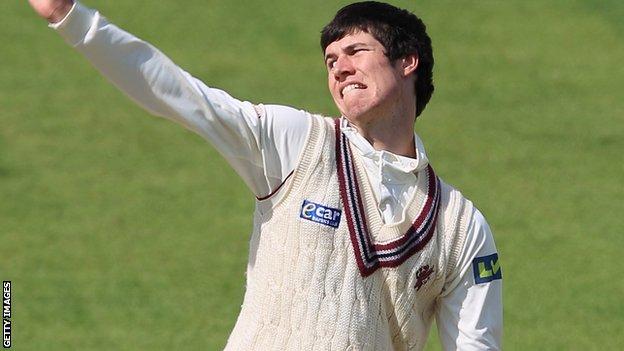 Somerset moved to the top of the Championship table with a five-wicket victory over struggling Durham.

George Dockrell (6-29) then took centre stage as Durham were skittled out for 167, Ian Blackwell top scoring with 38.

Arul Suppiah (73) helped lead Somerset to victory on 152-5 to hand winless Durham their third loss of the season.

The day began with Trego smashing some meaty blows to take him 11 short of a ton, before losing his middle to Jamie Harrison, who claimed 4-112 on his Championship debut.

Craig Overton (2-25) picked up two wickets in five balls, including Ben Stokes for a four-ball duck, and Alfonso Thomas got rid of first-innings centurion Will Smith.

Dockrell then polished off the innings with six successive wickets, including four with the total on 131. Liam Plunkett was out for a two-ball duck, while Phil Mustard and Callum Thorp also failed to trouble the scorers.

Needing 152 to win, Somerset had a slight alarm on 17-2 with Nick Compton falling for eight, meaning is he now 59 short of 1,000 first-class runs before the end of May.

But Suppiah hit seven fours and four sixes to bring the hosts close to their victory target, with Craig Kieswetter's unbeaten 22 securing Somerset their second victory of the season.