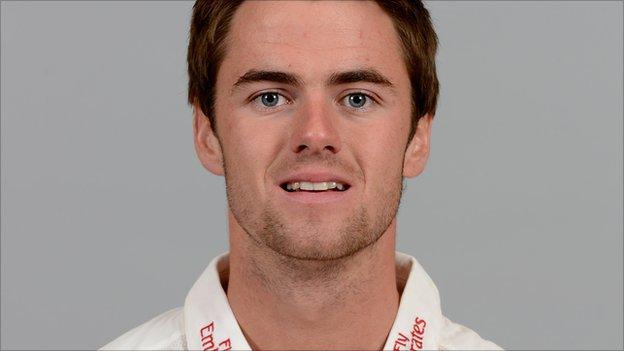 Durham seam bowler Jamie Harrison has spoken of his relief in taking his first wickets following his first-class debut against Somerset on Wednesday.

The 21-year-old left-armer dismissed opening batsman Arul Suppiah with his ninth delivery and went on to produce first-innings figures of 4-112.

"Getting my first wicket was a relief," Harrison told BBC 5Live Sports Extra.

"You hear the rumours of how flat Taunton is and it was a big relief to get a couple of early wickets."

"To be in a room with players of such calibre, internationals, it humbles you because you watched them as a youngster and now you're sat next to them," he continued.

"It's perfect when you say 'I feel like I'm doing this, what's your opinion?' and they're the perfect people to turn to.

"You have to keep your feet on the ground, I've bowled a couple of good spells in the first two games of first-team cricket and I've got to keep doing that."

BBC 5Live Sports Extra has ball-by-ball commentary for the first three days of Somerset v Durham at Taunton from Wednesday, 22 May through to Thursday, 24 May on DAB and online.