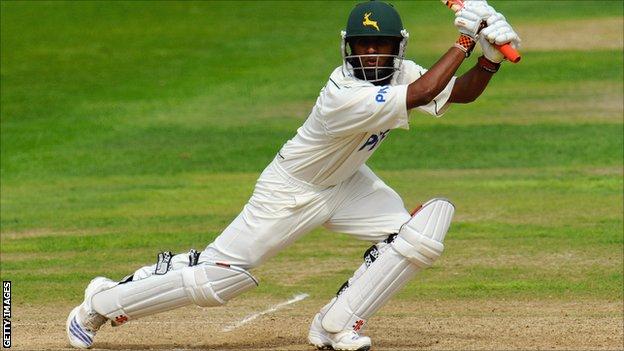 Hampshire have signed batsman Bilal Shafayat on a one-year contract after he impressed on a short-term deal.

The 27-year-old joined at the start of May as cover for Jimmy Adams and Michael Carberry.

The former Nottinghamshire player scored 93 on his debut for Hants against Derbyshire at The Ageas Bowl.

"The people in charge have shown some backing in me and support for me which, at this stage in my career, is very important," he told the club's website.

Shafayat was signed from Minor Counties cricket side Shropshire and given a chance to revive his first-class career, which included a spell with Northants in 2011.

Meanwhile, Hampshire chairman Rod Bransgrove says he wants the club's young players to become the cornerstone of the team for the next decade.

Hants lost several senior players after being relegated from Division One last season and Bransgrove's priority is now the future, rather than this campaign.

"We're trying to create a team for a decade," he told BBC Radio Solent.

"We've got a lot of young talent. Let's get together and develop it into a team that will last Hampshire for 10 years.

"Then we can start measuring it on the number of trophies that it wins."

However, Bransgrove wants to see the new side built around the likes of 20-year-old spinner Danny Briggs, who made his England debut in February, 22-year-old all-rounder Liam Dawson and wicket-keeper batsman Michael Bates, 21, who scored his maiden century last week.

"But watching young players develop is what it's all about at this club at the moment."